Meeting the living God in the New Mexico desert

"We had truly stumbled across the most wonderful treasure in the most unlikely place."

I remember looking out the airplane window marveling at the huge rock formations that seemed to shoot forth from the expansive red sand below, and wondering what this new adventure would bring. Such a barren land – strikingly similar to Jordan and other areas of the Middle East that I’d visited – right here in the United States.

Below me was New Mexico. It might as well have been Mars. 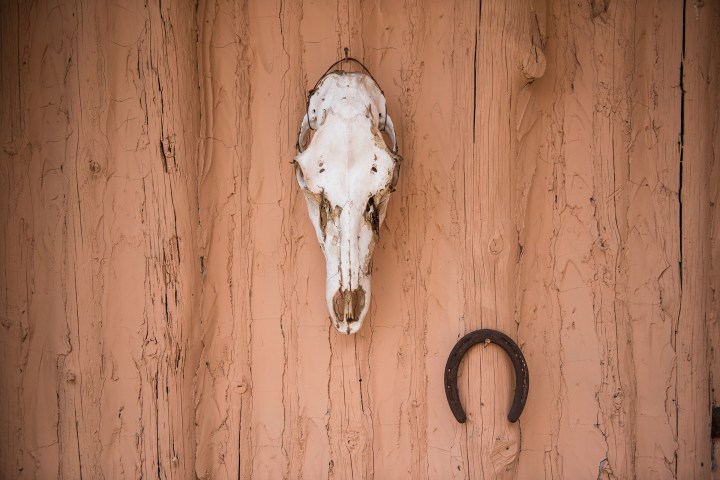 My wife Alicia was tagging along on the trip, content to give me the space I needed to do the work I had to do, which included researching and photographing the Catholic outreach to the Navajo Nation as well as shooting a wedding for a good friend of mine. We would be travelling to the city of Gallup, in the foothills of the Navajo Nation in McKinley County, one of the poorest places in the United States.

On our first day, which happened to be July 4, we set about locating the local missions of which there was no shortage, thanks to the Little Sisters of the Poor, the Missionaries of Charity, Sisters of St. Agnes, and others. On a phone call with someone back East, I casually mentioned all of the religious orders I’d be seeing and heard, “Oh, so you’re going somewhere that’s very poor…”

In the late afternoon, eager to explore, we drove into the Black Diamond Canyon region of Gallup. I knew exactly where I was going, because “guys don’t get lost” and after 12 hours in New Mexico I foolishly deemed myself an expert.

After driving around a bit “not getting lost” I saw a sign: Casa Reina Perpetual Adoration Chapel. It was a fading wooden sign on the side of a small wooden building at the bottom of Black Diamond Canyon. It was a little startling to come upon. I turned to my wife and said “Hey, you want to pop in and say hi?” She gave me that sideways look, one eyebrow raised, and said “Of course.”

We walked up to the entrance. There was a small poster-board sign hanging by the door that looked like it was made by little kids, and with the same innocent and joyful exuberance that kids have, it proclaimed “33rd Anniversary Casa Reina Adoration Chapel July 3. We pulled open the squeaky screen door and entered this very small wood-paneled chapel containing a huge monstrance and Host that completely overpowered the room.

And there sat a nun praying silently in the corner.

We sat down in stunned silence, taking in the total contrast of before us: God, Creator of the Universe in such an incredibly humble dwelling place. Sound familiar? With every intention of saying a quick prayer and moving on, the unthinkable happened — the nun left. We were the only ones in this perpetual adoration chapel that had been running for 33 years. My wife and I looked at each other and knew we were stranded in the Presence of Christ. We couldn’t leave.

As we sat and prayed, the intensity of the situation increased. God felt so hugely present in this tiny space that it was overwhelming; we didn’t want to leave.

It seemed like God was super-present in this intimate, humble setting but that wasn’t the case. God wasn’t any more present in this place than in any other place where the Eucharist is. But we were super present to Him, in this stranded silence. All about us was New Mexico desert silence and there was nothing to distract. It felt like sitting across the dining room table from a loved one.

We had truly stumbled across the most wonderful treasure in the most unlikely place.

After a time others showed up, and we made our way out of the Chapel, where we were greeted by a group of Sisters who are the custodians of the chapel. Their members of their order, the Sisters of Our Lady of Guadalupe and Saint Joseph, live in a similarly humble house adjacent to the Chapel. Their motto: A community of prayer and service, in peace, joy and love.

We returned each day to this place of grace and peace and were rewarded with the joy that comes from spending time with Christ.

I’d like to take credit for making the discovery of that little chapel while “not getting lost,” but that would be silly. The way I see it, God leads those who seek Him exactly where they should be if we would only let Him. It was true this time and it is every other time that I can remember. I only wish that I would stop clinging to my plans so much and allow God’s to unfold. His plans are always so much better than mine.

In this humble chapel in the middle of a very poor area dwells the living God. So simply, yet so powerfully.

It’s amazing what can happen when you seek Christ with an open heart. You really never know where you’ll end up or what you’ll discover, all I know is this; He will lead you and He will guide you, just as He brought us to this most unlikely place, which truly is the Treasure of Black Diamond Canyon.