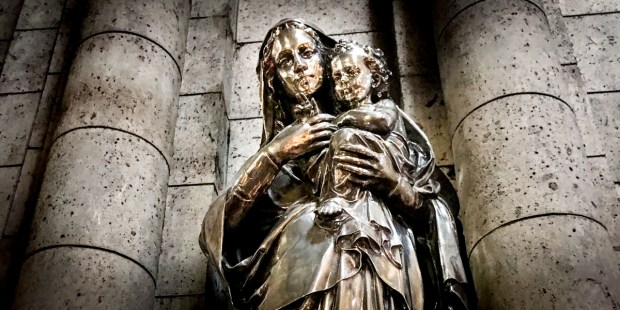 Didn’t God say, “Do not turn to idols or make for yourselves molten gods: I am the Lord your God”?

When you walk into a Catholic church, one of the most distinctive types of artwork to be found is the statue. To some this appears to contradict the Word of God, who said, “Do not turn to idols or make for yourselves molten gods: I am the Lord your God” (Leviticus 19:4).

Yet Catholics persist in decorating their churches with numerous statues. Why is that? Does it go against everything that God laid down in the Bible?

This topic was a controversial one in the early Church, requiring a council to settle the issue when some in the Church sought to destroy all images (not just statues). They believed any image of God was against God’s laws and a form of idolatry.

However, the Catechism of the Catholic Church explains, “in the Old Testament, God ordained or permitted the making of images that pointed symbolically toward salvation by the incarnate Word: so it was with the bronze serpent, the ark of the covenant, and the cherubim” (CCC 2130).

With this in mind “the seventh ecumenical council at Nicaea (787) justified … the veneration of icons — of Christ, but also of the Mother of God, the angels, and all the saints. By becoming incarnate, the Son of God introduced a new ‘economy’ of images” (CCC 2131). The Church has since taught that the, “Christian veneration of images is not contrary to the first commandment which proscribes idols. Indeed, ‘the honor rendered to an image passes to its prototype,’ and ‘whoever venerates an image venerates the person portrayed in it.’ The honor paid to sacred images is a ‘respectful veneration,’ not the adoration due to God alone” (CCC 2132).

The main difference between pagans who worship idols and Christians who venerate statues lies in the intention of the person. Christians who pray before statues do so to honor God or the saints, praying to the person “behind” the image rather than the image itself. A Christian is not bound to the statue. If the statue is destroyed, a Christian’s faith does not waver or cease. It is simply a representation of God (or a saint) and is a material object.

A pagan, on the other hand, is tied to the statue and believes that God is within the particular image. They adore the statue believing it holds great power. Destroying such an image in a pagan religion is one of the highest offenses possible.

As the Catechism pointed out, Christians do not “adore” the statue, but “venerate” it; adoration is reserved to God alone. If someone were to pray to the statue itself or adore the statue, they would be committing idolatry, but this is not what the Catholic Church instructs her members to do. The Church teaches Christians to venerate statues, recognizing that they point to a hidden, spiritual reality that is not bound to the representation.

Another way to put it is that statues are holy reminders of various saints and of God. They remind us of heavenly things and point our souls to the Trinity. Statues are instruments, tools to be used in the spiritual life and not ends in themselves.

So while it may seem that Catholics are worshiping statues, they are not. They are using statues, as God permits, as images that point “symbolically toward salvation by the incarnate Word.”

Read more:
Archaeologists find what may be the oldest depiction of the Virgin Mary