Pope Francis finances a beach for people with disabilities 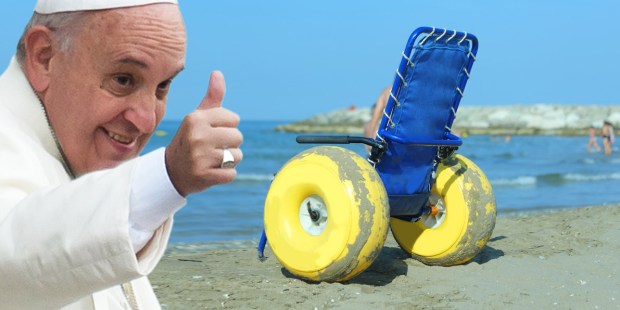 “La Madonnina” beach isn’t a ghetto for people with physical problems, but rather an area for them to integrate with society.

Pope Francis made a donation to cover the rental costs for a year for a private beach near Rome, run by a charitable organization that helps people with disabilities to be able to enjoy the sea.

How did Pope Francis find out about the beach? “The Holy Father learned of this initiative through various sources. We learned that some employees of the Office of Papal Charities were here,” said Fr. Massimo Consolaro, the 53-year-old pastor of the Focene parish.

The beach is located in the town served by Fr. Consolaro’s parish, in the municipality of Fiumicino, which is part of the city of Rome.

“The beach is a non-profit, charitable project. Our idea is to provide a service for those who need it most—people who are marginalized or weak, at the two extremes of age: children and the elderly,” the pastor commented to Aleteia.

Some people joke about “Pope Francis’s beach,” which is ironic, considering they are referring to a pope who renounced his summer residence near Rome at Castelgandolfo—leaving it open to the public—and who usually doesn’t take vacation.

“Well, we call it the beach of the Little Virgin Mary (‘La Madonnina’); She is the one who shelters us under her mantle,” said Fr. Consolaro, with his strong accent from Veneto, in northern Italy.

Some of the beneficiaries of this initiative are people who frequent social centers, shelters, or other municipal services or associations that offer assistance.

Nonetheless, Fr. Massimo explained that only 10 percent of the users are people with disabilities. On this beach, groups of children from schools mix together with elderly people from social centers.

The area is visited by “people with their families, just like any other beach. Therefore, this isn’t a ‘ghetto’ for people with disabilities; we work towards integration.”

The beach also mixes healthy diversion with ministry and spiritual life. “At 3 p.m., whoever wants to—it’s voluntary—can approach the statue of the ‘Madonnina’ (the ‘little Virgin Mary’) to pray the Rosary with us,” the priest commented.

“People say, ‘You don’t know what you’re doing.’ We had no way of knowing that this beach would attract so much media attention. Our project is pastoral in nature, focusing on the needs of people with disabilities, with the special mission of reaching the youngest among them, following in the footsteps of our patron, Aloysius Gonzaga.”

Pope Francis’ donation, made through the Papal Almoner, was sent to the Work of Love of the Work of Saint Aloysius Gonzaga Association. “It’s a place beyond the parish where we can guarantee protection for our kids.”

A wide walkway provides access to showers, ample bathrooms, canopies, changing rooms, and a cafeteria. Everything has been designed to make it accessible for people in wheelchairs or for those who use other forms of assistance to move around. There are brackets for umbrellas and beach chairs, and volunteers are on hand to assist those who need help getting into the water.

“This is the best-equipped beach on the Roman coast. The goal is to allow people with disabilities to be independent. If they come in a wheelchair, they can move around as they wish,” Fr. Consolaro explained.

The beach, which has been in operation since 2012, opens seven days a week from 9 a.m. to 7 p.m. for those who want a relaxing day. You don’t have to think about anything but how good it is that we are all brothers and sisters, warmed by the same sun.