On Star Wars and ‘The Last Monks of Skellig Michael’ 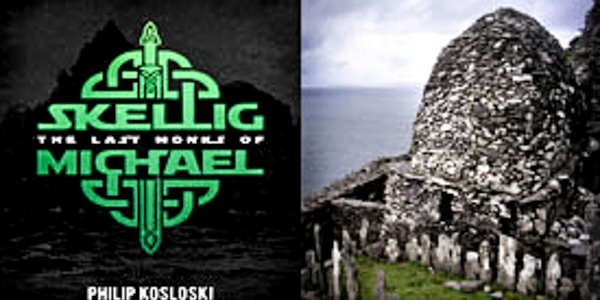 A fast-take interview with Philip Kosloski on an unusual “green martyrdom.”

The striking, if brief, final visuals in Star Wars: The Force Awakens moved our staff writer Philip Kosloski to identify the location for our readers, that being Skellig Michael, off the coast of Ireland.

Intrigued by the landscape, Phil let his curiosity drive him to further investigate the background of that mysterious place, and ultimately to write a book about it, one with a title that sounds like it could fit right in with the Star Wars realm: The Last Monks of Skellig Michael. Here he tells Aleteia a little about the “green” monks who lived there.

1) What inspired the book?
After watching Star Wars: The Force Awakens, I couldn’t get the final scene out of my mind. The scene was stunning and the landscape breathtaking. However, what most fascinated me were the ancient huts scattered over the island. In the back of my mind I knew they looked familiar. While I have never been to the island of Skellig Michael, I remember studying early Irish architecture in college and images of the famous beehive huts always fascinated me. So after watching the movie I set to work to rediscover the island and began to unravel the fascinating history of the monks who lived there. They were truly amazing men who lived at the edge of the known world, braving harsh weather, offering their lives as a sacrifice to God. I knew I had to write something about them and connecting them to the Star Wars universe was an added bonus.

2) If you could give this book another title, what would it be?

Maybe something like “In Search of a Green Martyrdom: the Monks of Skellig Michael.” In Ireland there developed a “green” martyrdom that focused on freely offering one’s life to God by living in harsh locales that were conducive for lives of penance. Skellig Michael was a perfect location for that.
4) Did writing this book teach you anything?
While writing this book I learned how connected the Irish church was to Egypt. After St. Patrick, the Irish church was chiefly inspired by the writings of the Desert Fathers of Egypt and it shaped their spirituality significantly. Irish monasticism was more in line with the desert hermits than it was with European traditions.
5) If there is one person you want to reach with this book, who would that be?
I didn’t write the book for scholars or historians, but for regular people interested in the subject. In particular, Star Wars fans will be most interested as I briefly delve into the various connections between the Star Wars universe and Catholicism. However, if someone isn’t familiar with Star Wars they will still be captivated by the lives of the monks that I describe.

6) What is the ideal beverage to have in hand while reading your book?

Irish whiskey or a cold Guinness, of course!