How to tell the difference between a monsignor, a bishop and a cardinal 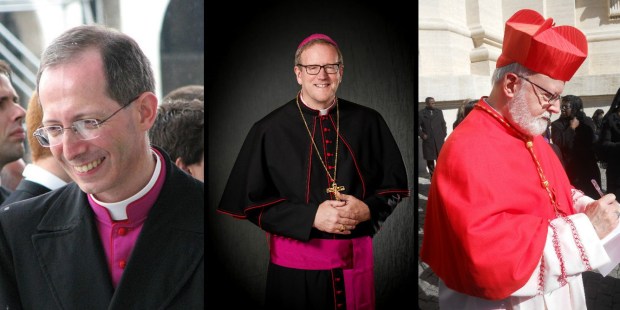 When all three wear the cassock, things can get confusing.

Outside of the liturgy, clergy members have various options of clothes to wear. For casual occasions most wear the simple black shirt with a white roman collar.

When attending more formal events, or when walking through St. Peter’s Square in Rome, bishops, cardinals and monsignors can wear a cassock that is indicative of their office. Their cassocks each have distinctive colors, but from afar are not easily distinguishable. It is even more difficult when these officials wear a black cassock with only the piping and sash being a different color.

Here is a quick guide to help identify each color and its symbolism.

Read more:
A cassock: Work clothes, not a dress uniform

For many centuries the pope was accustomed to grant honorary titles to priests within his Papal Court. There were numerous degrees of honors, typically only given to priests who worked closely with the Holy Father in Rome. This title was expanded over time and given to priests outside of Rome through the recommendation of a bishop, but was recently limited again by Pope Francis, returning to the older practice.

Being members of the Papal Court, monsignors wear the color purple. Typically monsignors do not have a zucchetto (the skull cap) or a pectoral cross, which distinguishes them from bishops and cardinals.

This color purple (which is closer to magenta) was connected to the tradition in the Roman empire to vest new dignitaries with a purple toga.  In medieval heraldry the color symbolized justice, regal majesty and sovereignty.

For most of Church history green was the color for bishops. This color is still seen on the traditional coat of arms that each bishop chooses when elected. However, in the 16th century the color was switched to “amaranth red,” which is named so in reference to the color of the amaranth flower. In practicality it more resembles the color fuschia.

Since it is a color similar to purple, it holds a symbolic value that points to the task of the bishop to govern his local diocese.

Besides the color, bishops wearing their cassock can be identified by their same color zucchetto and the pectoral cross hanging over their chest.

Read more:
This is why bishops wear so many hats

The technical name for the color that cardinals wear is “scarlet.” This color distinguishes them as members of the College of Cardinals and a “Prince” of the Church.

When the Pope places the biretta (a hat with 3 or 4 stiffened corners worn as part of liturgical dress) on top of the cardinal’s head, he says, “(This is) scarlet as a sign of the dignity of the cardinalate, signifying your readiness to act with courage, even to the shedding of your blood, for the increase of the Christian faith, for the peace and tranquility of the people of God and for the freedom and growth of Holy Roman Church.”

Interestingly, the bird known in North America as the “cardinal” was named after this class of Roman Catholic clergy.

Read more:
What is the white scarf that some bishops wear?