How Saint Veronica got her name 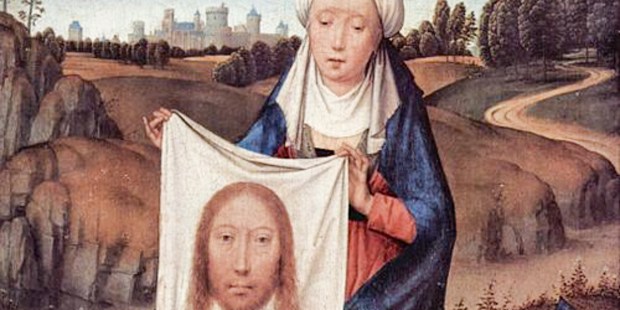 “Veronica” comes from “vera icona,” which means the “true image” of Jesus.

Saint Veronica is the woman who passed into history because of the beautiful and merciful gesture she offered Jesus during His walk to Calvary to be crucified: She approached Him and dried the blood and sweat off His Holy Face with a veil. Onto that veil was impressed—according to a popular tradition—the image of the Holy Face of the Messiah.

Thus, the “true image,” or vera icona, of Christ was left on this veil or cloth. This is thought to be the origin of the name “Veronica” for this pious woman, and not just for the cloth itself bearing the True Image of Jesus.

We don’t actually know what her real name was. Some think that “Veronica” might be a variation of the name “Bernice,” but the fact is, we simply don’t know. The name “Veronica” appears for the first time in the apocryphal document The Acts of Pilate.

According to tradition, Saint Veronica was a pious woman who lived in Jerusalem and who, after the Lord’s Passion, went to Rome, bringing that special veil with her. Her gesture of compassion on Calvary is remembered as the Sixth Station of the Cross.

One of the various popular traditions says that, once she arrived in Italy, Saint Veronica went before the Roman emperor Tiberius; when she had him touch that holy image, he was cured from an illness. She is thought to have lived in the capital of the empire during the same period as the apostles St. Peter and St. Paul. Upon her death, she left the relic of the “True Image” to Pope Clement I.

During the first Holy Year in history, celebrated in 1300, the Veil of Veronica was one of the Mirabilia Urbis (marvels of the city of Rome) displayed to pilgrims when they visited St. Peter’s Basilica.

The history of Veronica’s Veil is unclear after the Holy Year of 1600. Some claim the original image is still in St. Peter’s Basilica, while some believe it is now located in the Church of the Holy Face in Manoppello, Italy.

Benedict XVI was the first pontiff in 400 years to visit the image in Manoppello, in September of 2006.