In its haste to bury religion, Europe itself will fall into the grave 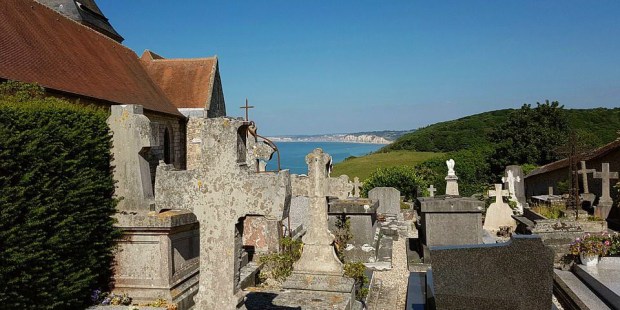 Europe is now rejecting the use of the only language that will soon matter. Thus will end its narrative.

My paternal grandmother used to break into Italian when speaking excitedly. Her American-born children would tell her, “You’re in America; we don’t speak that language anymore…”

I see her image in our family album, sitting on a bench, wearing a worn dress, a wary expression, and a mustache.

She is part of a coherent narrative that begins with images of impoverished immigrants, and moves swiftly into one of her sons lifting up a car, because he was just that strong. His sister strikes a starlet’s pose in a modest swimsuit. There is a marriage, and the album takes a decidedly Irish turn as cultures commingle.

Upward mobility makes a brief appearance before financial disaster strikes; the brief recovery allows for beauty — baptisms and weddings and First Communions — to make joyful appearances before a second, nearly annihilating disaster unfolds, and then the album loses its meaning.

The narrative ended because the family, in essentials, ended. The word itself, “family,” stopped having meaning for many of us.

We didn’t speak that language anymore.

Those who managed to retain some connection to the word, though, and the dialect of love in which it is rooted, constructed new narratives, and they became healed again, and strong in the paradoxical way that sacrifice and service toward something greater than the self makes one full, free, and fearless enough not to disdain the old language, but to relearn and embrace it anew.

These thoughts arose after reading this description of the House of European History, which seems like a dreary and incoherent family record:

The floors devoted to the atrocities of the twentieth century – the First and Second World Wars – are particularly impressive. One enters these parts of the exhibition in the dark, feeling disoriented. That is a physical experience of the mental state that one experiences walking past the House’s impressive exhibition on the Holocaust.

After these stirring images, the top floor is truly a disappointment. It is reserved for an overview of the European Union’s institutions, such as the European Parliament, the European Council, and the European Commission. … But the most remarkable thing about the House is that, as far as its account is concerned, it is as if religion does not exist. In fact, it never existed and never impacted the history of the continent.

The place sounds like my old family album if, instead of those early images of struggle, and hopefulness and faith and strength, it had begun with a mugshot of Grampa being arrested for wife-beating, followed by a picture of Grandma’s bloody face, and then only the empty narrative of cars and cakes and the next house that signified nothing but an end.

Without an acknowledgement of its spiritual history, the Brussels museum is saying, in essence, “We don’t speak that language, anymore. And we want no connection to its roots.”

If that is so — if Europe is truly committed to casting off the language and memory of the supernatural — then its narrative will come to a swift, deliberate, and inglorious end. It might as well bury itself in the sustainable grave it is already digging, because a new narrative has already begun on its lands, and it is communicating, and forging memories, almost entirely in supernaturalese.

If Brussels disdains to speak in phrases of similar dialect and depth, it will simply have no response to make, except “Excusez-moi” as it steps aside, to make room.

Read more:
In the revised history of Europe, “Religion does not exist…”