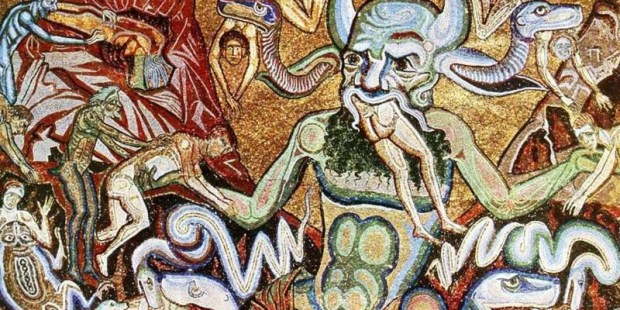 Public Domain
The mosaic of the Baptisterium of Florence, by Giuseppe di Marcovaldo. A horned Satan devours the souls of the condemned through his three mouths (the other two, as serpents, coming out of his ears). This was a relatively popular motif in medieval and Renaissance art, which can be found also in Dante's Divine Comedy.
Share
Print
Gelsomino Del Guercio | Aug 04, 2017

From Mary Magdalene de Pazzi’s suicide attempts, to Egidius’s pact: This is how the devil assaulted their bodies and surroundings.

This is the realm of spirituality: the territory of mystics. Here, the border between what actually happens outside the body and what is perceived as reality is hard to verify. But history relates many cases in which a saint or a blessed has been forced to confront the devil, and has suffered physical torture. Sometimes, Satan has possessed their body; other times, he has vexed or obsessed them.

In his book Santi indemoniati (Possessed Saints), author Marco Tosatti lists numerous such cases. As the book is not available yet in English, Aleteia has picked seven to share here.

Fr. Juan del Castillo, a 16th century Jesuit, blasphemed—against his own will—because he was obsessed by the devil. “The devil,” writes fellow Jesuit, Fr. Auguste Poulain, “also used the hands of that holy religious to strike or burn images of the Blessed Virgin.”

Many saints and beati, afflicted by the devil, have been tempted to commit suicide. Mary Magdalene de Pazzi, who lived in the second half of the 16th century and was known for her ecstasies, left the choir on the night of the feast of St. Andrew (November 30), and ran into the kitchen to grab a knife and try to kill herself. On another occasion, fearing she might once again yield to that impulse, she had herself tied up.

Blessed Egidius of Portugal, who loved science and necromancy, made a pact with the devil during one of his voyages. “He renounced his faith with an abominable oath, and he sold his soul with a pact written with his own hand, and signed with his blood,” wrote his biographer, Dominican friar André de Resende.

One day, a ghost appeared to him in the form of a knight in armor who commanded him to change his life. Egidius, terrified, asked the Lord for forgiveness, and from then on, he embarked on a spiritual journey that led him to become a friar.

For seven years this beato, who lived in the 13th century, was tormented by demons who reminded him of his past and of the pact he had signed and not fulfilled. One day, at last, through the intercession of the Virgin Mary, the pact was dissolved, and the demons left Egidius in peace forever.

Diabolic vexations infested the life of St. Colette of Corbie, who was born in 1380. She, the great reformer of the Poor Clares, was the hostage of demons who used natural means to disturb her throughout her mystical relationship with God.

Pierre de Valles, the holy woman’s confessor, recounts: “She felt an instinctive revulsion towards ants. At the convent of Besancon, the demons persecuted her, often filling the places she frequented and the things she liked, such as the oratory and her books, with those bothersome little insects. Thousands of these bugs would gather, and would then disappear with the same speed with which they had appeared.”

In Languedoc, these persecutions took the form of flies. In Picardy, her bed and oratory were invaded by snails, turtles, and other reptiles. Among these persecutions, the most intense lasted for the seven years leading up to her death. When she prayed, demons appeared to her under the appearance of flies, leopards, lions, and other beasts of every kind. Many of her sisters in religion also saw those figures.

St. Nicholas of Tolentino, of the Hermits of Saint Augustine, was the worker of many miracles—30 of which were judged authentic by the commission that investigated his cause of beatification. Not even he was free of remarkable annoyances of demonic origin. One evening, while at prayer in his oratory, he saw the devil blow out the lamp, throw it to the ground, and smash it.

His contemporary and biographer, Friar Peter of Monte Rubiano, recounts these vexations. He tells how the evil spirit set up residence on the roof of Saint Nicholas’ oratory, imitating the cries of various wild beasts, and turning over the tiles on the roof as if wanting to turn the entire thing upside-down.

Seeing that the saint continued to pray, the demon beat him fiercely, to the point where the bruises were visible all over his body for days. Once, the demon who tormented him declared, “I am Belial, and I have been sent to you as a prod for your holiness.” St. Nicholas, who died in 1305, was canonized in 1446.

St. Alphonsus Rodriguez is the patron saint of porters and ushers. After having received great blessings, he was attacked, both by violent temptations and by physical assaults, starting around the age of 50 and continuing for seven years. “At times,” writes Alban Butler, his biographer, “he was so oppressed, and pursued so closely, that it was impossible to describe his suffering.” Sometimes, he heard infernal conversations, and witnessed demons blaspheming against God. Other times, he was at the point of dying from suffocation, because the evil spirits were squeezing his throat.

Generally, these events started at midnight, while he was asleep. St. Alphonsus would be awakened by the great din. Then, the demons would begin to dance around him, jump on top of him, and grab him by the arm to try to force him to do evil, without him being able to get rid of them. Those were years of great suffering.

St. Ignatius of Loyola also had to fight against Satan. Paul Verdun writes, “Giampaolo was Saint Ignatius’ roommate for many years. Once, while sleeping one night in a bed near the saint’s, he was woken up by the sound of blows, and of cries from the founder of the Company of Jesus. He arose, and asked his roommate what was happening. But St. Ignatius, without speaking, ordered him to go back to bed and sleep. The spirit of darkness had tried, on that occasion, to strangle the saint, who was left voiceless for many days.”