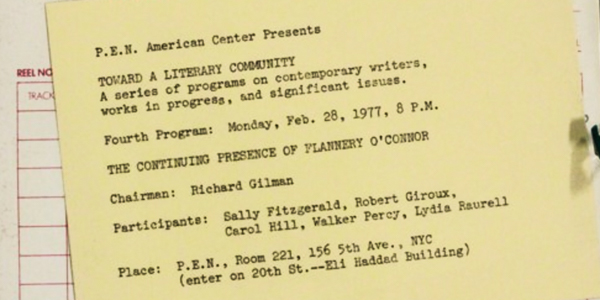 Fans of the late Catholic novelist Flannery O’Connor now have a chance to be a fly on the wall at a discussion among those who knew the author and her works best.

This previously unreleased recording of a discussion of O’Connor’s literary style and impact took place at the P.E.N. (poets, playwrights, essayists, editors) American Center’s offices in New York in February of 1977, 12 years after the author’s death, and has been made available online as part of PEN America’s release of their digital archives.

Among those discussing her works are the novelist Walker Percy, O’Connor’s publisher Robert Giroux, and Sally Fitzgerald, who was one of the O’Connor’s dearest friends, and editor of her posthumously published book of letters, The Habit of Being: Letters of Flannery O’Connor.

Hosted by the literary critic Richard Gilman, the discussion gives one an intimate sense of what a giant Flannery O’Connor, a southern woman with a deeply Catholic sensibility, was to a New York literary world where she was something of a fish out of water.

“She was a better writer than any man of her generation that I know,” quips Gilman in response to those he says he’s heard saying that O’Connor “writes just like a man.”

More a tribute than a critical discussion, the panelists share their best anecdotes about O’Connor — recalling her wit, her habits of writing, and her deep faith, which, Walker Percy says in the discussion, is the main subject of her fiction.

“I don’t know of a more theologically-oriented writer, “ he says. “And she made no bones about it. Someone asked her what her main subject matter was, and she said her subject matter was always the action of grace on a territory largely occupied by the devil.”

One added bonus for Percy fans: hearing the novelist, who had trained to be a doctor before he took up writing, give a very professional sounding description of lupus, the disease that O’Connor suffered from for most of her literary career, and of which she died at the age of 39 in 1964.

To access other free discussions and letters from PEN America’s newly available archives, click here for the index.