When do we bow our heads at Mass? 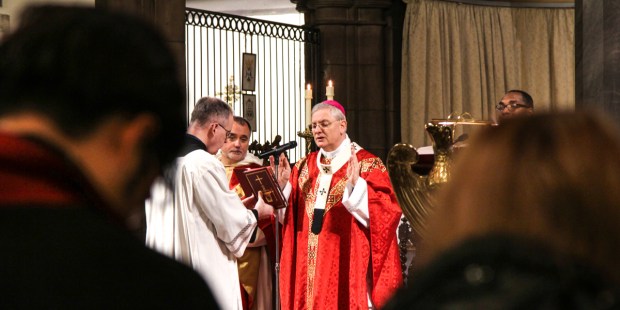 The faithful are asked to make this simple gesture several times during the liturgy.

Among the lesser known gestures at Mass is the action of bowing the head. It is a simple movement used in many different cultures as a sign of respect and has its own place within the Catholic liturgy.

The General Instruction of the Roman Missal (GIRM) explains, “A bow signifies reverence and honor shown to the persons themselves or to the signs that represent them. There are two kinds of bows: a bow of the head and a bow of the body [also known as a profound bow].”

The GIRM then lays out several moments during the Mass when those present should bow.

1) During the Creed – “The Creed is sung or recited by the priest together with the people (cf. no. 68) with everyone standing. At the words et incarnatus est (by the power of the Holy Spirit . . . and became man) all make a profound bow; but on the solemnities of the Annunciation and of the Nativity of the Lord, all genuflect” (GIRM 137).

2) After the consecration (if you are not kneeling) – “In the dioceses of the United States of America, [the faithful] should kneel beginning after the singing or recitation of the Sanctus until after the Amen of the Eucharistic Prayer, except when prevented on occasion by reasons of health, lack of space, the large number of people present, or some other good reason. Those who do not kneel ought to make a profound bow when the priest genuflects after the consecration” (GIRM 43).

3) Before receiving the Holy Eucharist at Communion – “When receiving Holy Communion, the communicant bows his or her head before the Sacrament as a gesture of reverence and receives the Body of the Lord from the minister” (GIRM 160).

4) During a solemn blessing at the end of Mass – “If a prayer over the people or a solemn formula for the blessing is used, the deacon says, Inclinate vos ad benedictionem (Bow your heads and pray for God’s blessing)” (GIRM 185).

5) When hearing the name of God or specific saints – “A bow of the head is made when the three Divine Persons are named together and at the names of Jesus, of the Blessed Virgin Mary, and of the Saint in whose honor Mass is being celebrated” (GIRM 275).

Read more:
Why do Catholics genuflect in a church?