The promise and peril of new genetic engineering technology 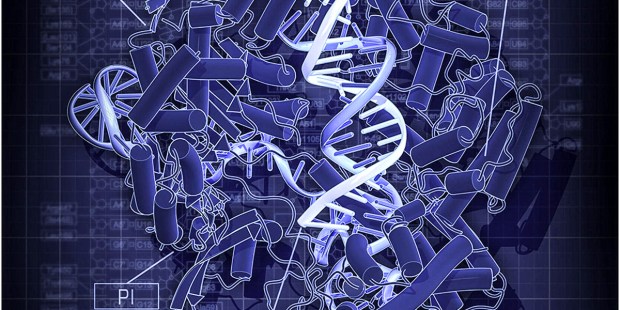 CRISPR gene-editing could transform medicine, but at what cost?

To understand why scientists are so excited about a new development in genetic engineering, it’s helpful to think of “word processing” — and use a little imagination.

In older forms of genetic engineering experiments, scientists tried to introduce changed genes by putting them on viruses and introducing them into the body. “They also shot genes into cells. It’s almost like a shotgun approach, blasting little specks of gold with genes on them, into a cell. You hope it makes it into the nucleus,” explained John Brehany, an ethicist at the National Catholic Bioethics Center in Philadelphia. “Once you get it in there you have two copies of 23 sets of chromosomes. The chromosomes are coiling and uncoiling all the time. How do you get it to the right spot of the right chromosome? It’s pretty impossible.”

It would be analogous to shooting a correct word through the cover of an encyclopedia, if you could, and hoping it makes it to the right part of the right sentence in the right paragraph.

The trouble is, the body’s immune system regards things like viruses and specks of gold as foreign bodies and attacks them.

“With this new technology, they think they have a tool that is safe enough and powerful enough” to edit genes that would be carried on to future generations, Brehany said.

The accuracy of the new technology—CRISPR-Cas9—could be compared to the search-and-replace function of modern computing, he said. With a sort of “genetic scissors,” the process snips out a mutated DNA sequence in a fertilized egg, and that is replaced with a synthetic healthy DNA sequence.

Scientists working at Oregon Health and Science University, as well as in California, China and South Korea, reported that they repaired dozens of embryos, fixing a mutation that causes a common heart condition that can lead to sudden death later in life, according to a report in the New York Times. They said they were able to produce embryos in which all cells were mutation-free, and they avoided creating unwanted extra mutations. Previous experiments yielded some embryos with cells that did not get repaired—a phenomenon called mosaicism that could result in the mutation being passed on—as well as unplanned mutations that could cause other health problems.

A person familiar with the research said that “many tens” of human IVF embryos were created for the experiment using the donated sperm of men carrying inherited disease mutations, according to Technology Review. They were destroyed after three days of life. But if the embryos were allowed to develop into full-grown babies, they would not only be disease-free but also would not transmit the disease to descendants.

Much of the media reporting on the breakthrough focused on people’s concern that the new technology would open the way to creating “designer babies” with certain traits, like greater intelligence or athleticism. But some ethicists are also concerned about the means used to get this far.

“Very young humans have been created in vitro and treated not as ends, but as mere means or research fodder to achieve particular investigative goals,” said Father Tadeusz Pacholczyk, director of education for the the National Catholic Bioethics Center.

“Their value as human beings is profoundly denigrated every time they are created, experimented upon, and then killed. Moreover, if such embryos were to grow up, as will doubtless occur in the future, there are likely to be unintended effects from modifying their genes,” Father Pacholczyk told Catholic News Agency.

Yet, the potential for curing horrible diseases is tantalizing and raises the stakes for those who point out the moral and ethical minefields involved. The Times noted that if clinical applications are developed, CRISPR “could apply to any of more than 10,000 conditions caused by specific inherited mutations.”

Researchers and experts said those might include breast and ovarian cancer linked to BRCA mutations, as well as diseases like Huntington’s, Tay-Sachs, beta thalassemia, and even sickle cell anemia, cystic fibrosis or some cases of early-onset Alzheimer’s.

“You could certainly help families who have been blighted by a horrible genetic disease,” said Robin Lovell-Badge, a professor of genetics and embryology at the Francis Crick Institute in London, who was not involved in the study.

“The idea that humanity would knowingly move back from the opportunity to prevent diseases from being passed on to future generations is ludicrous,” said well-known bioethicist Arthur Caplan.

“The Church teaches that therapy is a good thing, and that the use of modern science and technology to prevent or heal disease or dysfunction can be good as well,” Brehany said. “The Church has not condemned intergenerational genetic modifications in the same way it has abortion. Rather, the Church has focused attention on significant prudential issues — i.e., it’s not safe enough, it’s not tested, etc. In theory, if real therapeutic interventions which healed individuals and prevented the transmission of genetic diseases could be performed with a high level of safety and reliability and equity, the Church wouldn’t condemn that. But one question is how do you get to that level of safety and reliability? How do you test to make sure such genetic engineering is safe and reliable? If it means that scientists have to test it on thousands of human embryos and deliberately create and destroy them, then that’s fundamentally wrong. It may be that future therapies involve some risks, but it’s wrong to kill a hundred human embryos even to save a billion humans.”