The Catholic doctor who invented the stethoscope 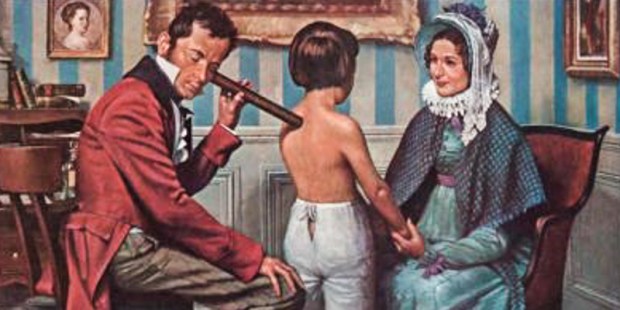 A French physician, known as a thoroughly kind and charitable man, also identified and named melanoma and advanced treatment for TB.

Have you ever wondered who invented the stethoscope?

Doctors used to place their ears directly on the chests of patients (a procedure known as immediate or direct auscultation) in order to diagnose their conditions. As you may imagine, this could be quite embarrassing for female patients. Thanks to a quick-thinking 35-year-old Frenchman, doctors and patients have been spared the embarrassment for the last 200 years.

René-Théophile-Hyacinthe Laennec (February 17, 1781 – August 13, 1826), who died 191 years ago today, was a French physician who almost did not become a doctor, because his father – a lawyer – discouraged him from joining the medical profession. However, after taking a break in the countryside, where he danced, composed poetry and studied Greek, Laennec returned to the study of medicine.

One day, René Laennec was examining a female patient who displayed signs of heart disease. He later wrote in his treatise De l’Auscultation Médiate (1819):

In 1816, I was consulted by a young woman laboring under general symptoms of diseased heart, and in whose case percussion and the application of the hand were of little avail on account of the great degree of fatness. The other method just mentioned [direct auscultation] being rendered inadmissible by the age and sex of the patient, I happened to recollect a simple and well-known fact in acoustics, … the great distinctness with which we hear the scratch of a pin at one end of a piece of wood on applying our ear to the other. Immediately, on this suggestion, I rolled a quire of paper into a kind of cylinder and applied one end of it to the region of the heart and the other to my ear, and was not a little surprised and pleased to find that I could thereby perceive the action of the heart in a manner much more clear and distinct than I had ever been able to do by the immediate application of my ear.

At first, Laennec simply called his new instrument “Le Cylindre.” However, after his colleagues gave it various names that annoyed him greatly, Laennec christened his invention the “stethoscope,” from the Greek stethos (“chest”) and skopein (“to look at, examine”).

Laennec is known today as the father of modern pulmonary disease research. Moreover, he coined the terms “melanoma” (from Greek melas, “black,” and –ōma, indicating the result of an action) and “cirrhosis” (from the Greek kirrhos, “tawny,” and –osis, referring to a state or condition). In 1804, Laennec was the first person to lecture on the skin cancer melanoma, despite still being a medical student. He also contributed to the understanding of peritonitis, an abdominal inflammation.

Above all, Laennec studied tuberculosis. When he was five years old, he lost his mother to the disease, and Laennec was sent to live with his great-uncle the Abbé Laennec, who was a priest. The young René was a sickly child who was often fatigued, feverish, and asthmatic (incidentally, the mucus produced by asthmatics is named “Laennec’s pearls” in his honor). Yet, he was a precocious student who began his English, German and medical studies at the age of 12, under the tutelage of his uncle Guillaime-François Laennec.

As a native of Brittany, Laennec was an extremely devout Catholic. It is related in The Original Catholic Encyclypedia:

“A characteristic story illustrates this: On his way to Paris with his wife he was thrown from his carriage. When the vehicle was righted and they had once more been seated he said to her: ‘Well, we were at the third decade’; then they went on with the Rosary they had been reciting just before the accident.”

Laennec was also known as a thoroughly kind man, who exercised great charity for the poor. The Scottish physician Sir John Forbes (1787–1861) noted in his annotated translation of Laennec’s treatise:

Laennec was a man of the greatest probity, habitually observant of his religious and social duties. He was a sincere Christian, and a good Catholic, adhering to his religion and his church through good report and bad report. “His death (says M. Bayle) was that of a Christian. Supported by the hope of a better life, prepared by the constant practice of virtue, he saw his end approach with much composure and resignation. His religious principles, imbibed with his earliest knowledge, were strengthened by the conviction of his maturer reason. He took no pains to conceal them when they were disadvantageous to his worldly interests; and he made no boast of them, when their avowal might have been a title to favor and advancement.”

Dr. Austin Flint, the 1884 president of the American Medical Association, observed:  “Laennec’s life affords a striking instance among others disproving the vulgar error that the pursuit of science is unfavorable to religious faith.”

While assiduously studying tuberculosis, Laennec unfortunately contracted the disease, and died 10 years after inventing the stethoscope. It was his nephew Mériadec Laennec who diagnosed  René Laennec with the deadly contagion, using the stethoscope his uncle had invented (Matt Payton, The Independent).

Laennec wrote: “I know that I have risked my life, but the book I’m going to publish will be, I hope, useful enough to be of more value than the life of a man.”

Let us pray for devoted doctors everywhere, who like René Laennec have dedicated their lives to healing others, even at great personal cost. St. Giuseppe Moscati, pray for us.