Doubting Thomas and the girdle of the Virgin Mary … and us 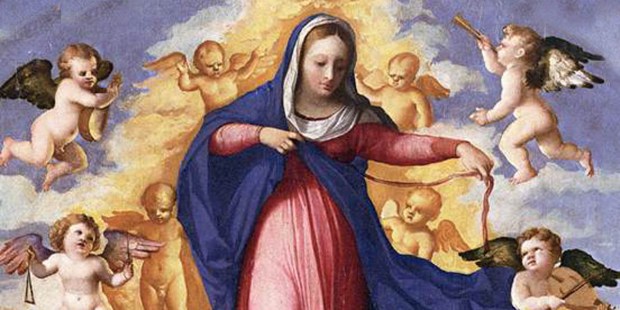 My favorite story associated with today’s Solemnity of the Assumption has to do with Mary’s girdle, and how she dropped it.

I am old enough that when I first heard this 14th-century Italian legend, I didn’t know that girdle was another name for a braided belt or sash. I was fascinated by the notion that the Blessed Mother, like my mother, wore a longline Playtex foundation garment, complete with removable snap garters for holding up hosiery, under her clothing every day. Maybe, like my mother, Mary had a bad back? And maybe she dropped her girdle at the Assumption, as angels carried her body and soul to eternal bliss, for the same reason my mother groaned “My girdle’s killing me!” every night. Mom finally in her PJs, the Blessed Mother finally free of earth – unrestrained by girdles of sorrow.

The actual legend is not a whole lot less colorful. According to the story, when it came time for Mary’s life on earth to end (we will not, here, get into the Schrodinger’s-cat conversation about whether Mary died or simply “fell asleep”; the Church in her kindness leaves that open) a message was sent to the Apostles to reunite at her bedside. All of them arrived promptly — except, of course, Thomas. To give the doubter the benefit of the doubt, it wasn’t easy to hop a fast ship from India at the time.

As the 11 looked on in wonder, Mary was taken from her bed/tomb and assumed into the heavens by angels. From this perspective, she saw Thomas from afar, racing breathlessly. Knowing – she’d been here before, after all – Thomas’ need for physical proof of miracles, and knowing that his standards of proof were much higher than an empty tomb, Mary began loosening the girdle binding up her tunic. As Thomas finally arrived to be chided by the others for his tardiness, and as he shook his head at the by-then empty sky, Mary let her girdle fall into his open hands.

Do you love this as much as I do? There are variations. Sometimes the story is told that Thomas never made it back until much later, and Mary appeared to him to bring him the girdle as proof. (That would make Thomas the first recipient of a Marian appearance.) Another version — perhaps invented by Thomas’ near and dear ones, tired of his being the butt of faith jokes — has Thomas being the first and only Apostle to arrive, the only witness to the Assumption, with the girdle left behind to show the others. (“Now who’s the Doubter?” you can hear him taunting.)

The girdle itself, according to time-honored custom, has been preserved in the Cathedral of Prato in Tuscany, where it has worked wonders like ending a siege and blessing infertile women with children and preventing miscarriages. This latter association comes from the fact that such girdles were traditionally worn by married women with children – much as Our Lady of Guadalupe is shown with the black band or girdle of an Aztec pregnant woman. There are competing miraculous girdles in the Greek and Syrian Orthodox traditions.

The legend of Doubting Thomas and the Virgin’s Girdle inspired a good bit of Renaissance art, especially in Tuscany. One of my favorites, by Palma Vecchio, shows Mary undoing her girdle above the astonished 11, with poor Thomas merely a blot on the mountainside in the distance. But I think it’s more than just a quaint story from the past.

There’s a reason the legend comes to mind on this Assumption Day, when US Catholics, like other Americans, find themselves knotted up in the angry politics of division, derision, and suspicion. When so wise and moderate a leader as Archbishop Charles Chaput can issue a statement deploring racism and violence and then be called out for it by Catholics on social media, something is very wrong. When we vilify one another for what we say and for what we don’t say, when we answer every challenge to our faith commitment with a “well, what about the other side?” we have missed the message to gather as Church around Our Lady.

The Solemnity of the Assumption celebrates the reuniting of body and soul in the Original Innocence of an unbroken world. But this broken world is the one we live in, the one to whose brokenness we daily contribute. In it the flames of prejudice and hatred and despair burn fiercely, and to those flames we add fuel. We are each of us as suspicious of wonder, as tardy to the scene of miracles, as the Doubter. Thomas, whose name means “twin,” is our twin.

But here’s the real miracle. Even running late, even broken and hateful and afraid and sad, there is a place for us by our Mother. She waits for us, and if she cannot wait she sends back signs. From Lourdes, healing. From Fatima, the roadmap to peace. From Tepeyac, the words that she herself is the Mother of the oppressed, herself “the little dark one.”

And from the clouds, this day, her girdle – unknotted as she undoes the knots of our days, falling gently around us to draw us together so we can look into one another’s eyes and stop doubting that we are one. She delivers our besieged hearts from anger and fear. She bestows on us the grace to bring birth out of barrenness, to keep the most vulnerable alive.

And then, of course, she reminds us what we Apostles are to be about – actively, body and soul, working to proclaim and live the Gospel that frees all people from every kind of hell. Working to lift one another, as angels lifted Mary, to everlasting joy.

O Mary conceived without sin, pray for us who have recourse to thee!

Read more:
How this prayer to Our Lady, Undoer of Knots, can set you free