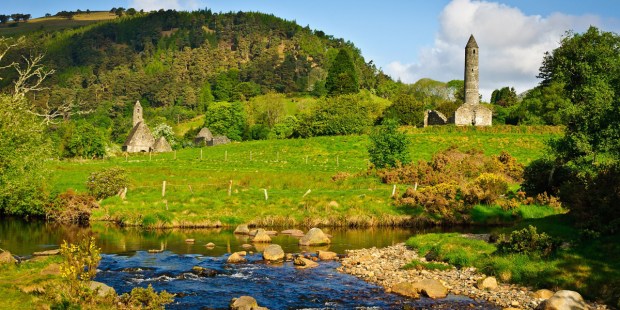 “Pilgrim Paths” offer guided walks retracing the steps of penitents of the past.

Ireland’s long tradition of holy pilgrimages dates back to as early as the year 441, when St. Patrick fasted for 40 days on what came to be known as Croagh Patrick. Over the centuries, medieval pilgrims on their own penitential journeys have ascended to the summit of Croagh and followed other sacred paths winding across Ireland.

In spite of its long history as a pilgrim destination, Ireland’s network of pilgrimage routes isn’t as well known as Spain’s Camino de Santiago, which now attracts both Christians and non-Christians alike. The number of pilgrims making the Camino in Spain increased from 1,000 in 1985 to almost 300,000 today.

To introduce a world that is apparently hungry for spirituality-motivated walking tours to Ireland’s own well-worn paths, the Pilgrim Paths foundation was founded in 2013. One of the first things the foundation did was create an Irish Pilgrim Passport, in which walkers could receive stamps for walking each of five main penitential routes through Ireland.

For the first time this year, Pilgrim Paths is offering a guided tour along all five of the pilgrim walks. The guided 124 km (77 mile) journey will take place from August 19 to 26, and follow the five main routes.

“All five of the paths are fully waymarked, and people walk them by themselves all the time,” O’Dwyer told Independent.ie Travel.

“But this is the first time it will have been done as a guided trail,” he said.