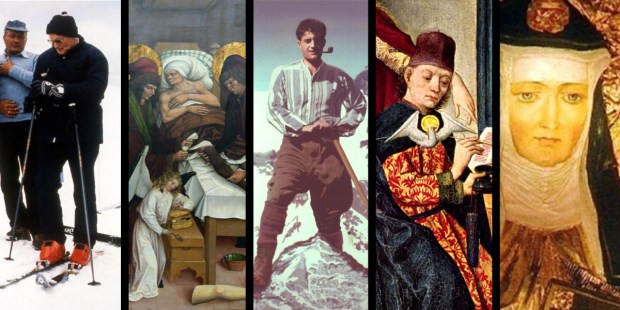 Properly caring for our body and our health is a holy endeavor … and here are five people who prove it.

Saints have a reputation for being ethereal, otherworldly creatures who only care about heaven. They fast from food all the time and never see the light of day because they spend most of their time praying in dark cells that only have one tiny window, which is why they’re all so pale and thin in their pictures.

Read more:
4 Saints who stood up to dictators… and what we can learn from them

For some, sure, this may be true. But there are a number of saints who took great delight in their physical health and abilities, whether it was their enjoyment of the great outdoors, sports, or the art of healing.

To be a spiritual person, you don’t have to ignore your body. In fact, a healthy care for the body has an intimate connection with our spiritual health. Here are five saints who prove it …

John Paul II is the much beloved pope known for standing up to communists and energizing massive crowds at World Youth Days around the world. It isn’t a secret that he was also a dedicated athlete who loved nothing more than to backpack overnight and camp on the side of a mountain (where he would offer Mass on an overturned kayak) or aggressively ski down a snowy slope. He loved sports so much that he spoke numerous times to clubs and teams. Many of his talks are recorded at the Vatican website because they weren’t about which team he liked best or how much fun it is to win so much as they were in-depth meditations on the meaning of physical activity.

Read more:
How John Paul II can help us really pray the Litany of the Sacred Heart

John Paul II thought about sports on a different level, noting that in a human being body and soul are intimately connected. He highlighted this connnection when speaking to the Italian national soccer team in what has to be the greatest, most intellectually challenging pre-game pep talk of all time. He said, “Athletic activity, in fact, when practiced in the right way, tends to develop strength, proficiency, resistance, and harmony, while favoring at the same time interior growth, becoming a school of loyalty, courage, endurance, tenacity, and brotherhood.”

Pier Giorgio was born in Italy in 1901. He died young from an attack of polio, which shocked those around him because before his brief illness he was a perfect picture of health. Outdoor sport particularly appealed to him, and he spent many happy days hiking, skiing, and mountain climbing. He was an expert mountain climber in particular and would often outpace his companions up a climb, typically with a rosary in his pocket and a pipe ready to light at the summit.

There’s a well-known picture of Pier Giorgio climbing a mountain about a month before his death, and on the back he wrote “Verso L’Alto,” meaning “To the heights.” In sports, in physical well-being, in spirituality, and in happiness, this positive statement makes a great motto. In everything you do, strive to ascend to the heights.

St. Luke is about as famous as a person can possibly be, seeing as how he authored part of the most popular book of all time when he completed Luke and Acts. Writing wasn’t his day job, though – he was actually a doctor. His career wasn’t a secret, but even if his Gospel doesn’t come right out and say it, there are clues sprinkled throughout his writing.

For instance, when Luke tells the famous camel-through-the-eye-of-a-needle story, he uses a word that refers specifically to a surgeon’s needle and not any other, more common, examples of a needle. When he describes a woman with a medical issue who had come to Jesus for healing, he gets in a dig at his fellow doctors with the aside, “though she had spent all her living on physicians, she could not be healed by anyone.” He gets in a dig again at doctors in another story, when he records Jesus quoting a familiar local proverb, “Physician, heal thyself!”

Clearly, Luke is interested in medical matters and human health, but he understands that health is more than medical science. When he talks about healing, it’s clear he means physical as well as spiritual.

Cosmos and Damien were twins born sometime in the 3rd century. Later in life, they studied medicine and began to practice widely in Syria. As doctors, they were forward-thinking and are credited with attempting the first ever limb transplant on a person when they tried to replace the cancerous leg of a young man.

The brothers practiced medicine because it was important to them to be instruments of healing to those who were suffering. Money never mattered to them and they were known as the Silverless Ones, because they never charged for their services. To this day, they are known as the patron saints of organ donors and surgeons. These two show that concern for others includes tending to their physical health.

Considered to be the first German woman physician and the mother of German botany, Hildegard was born at the turn of the 12th century. She became incredibly famous when God began giving her mystical visions at a young age and the pope had her write them down to share. A highly intelligent woman, she also wrote a number of books on diverse topics, and one in particular stands out for its insight into herbal medicine and naturopathy.

Known as the Liber Subtilatum, or “The book of subtleties of the Diverse Nature of Things,” it describes a number of plants and animals, along with the medicinal use of each one. For instance, she writes, “Reyan (tansy) is hot and a little damp and is good against all superfluous flowing humors and whoever suffers from catarrh and has a cough, let him eat tansy.”

While no one would advocate rolling back the clock to a time when medicine was less developed, Hildegard’s methods formed the foundation of a growing body of knowledge about health and healing, and even today many appreciate and use her knowledge of herbal remedies. Hildegard is truly extraordinary in her ability to not only have ecstatic spiritual visions, but to give her attention to natural sciences and human health and well-being.