Knights of Columbus planning to place 1,000 ultrasound machines by 2019 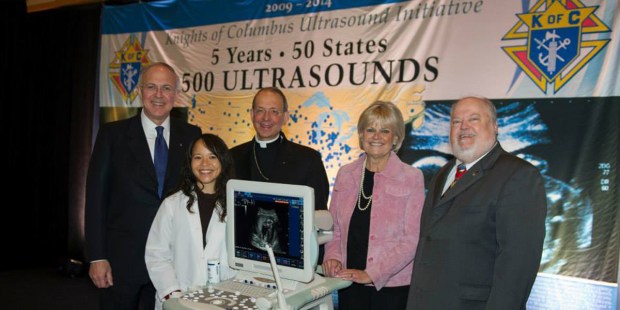 Local chapters working with national office to make goal for or 10-year anniversary of initiative.

The Knights of Columbus calculate that an ultrasound machine in a pregnancy resource center or mobile unit can save the lives of four unborn babies a week. Since 2009, they’ve so far placed 829 of these machines. By 2019, the 10th anniversary of the ultrasound initiative, the Knights have set a goal: 1,000 machines for more than a million lives.

Since 2009, Knights at the state and local levels have partnered with the Supreme Council to fund the ultrasound machines. The 829 units placed so far have gone to centers or in mobile medical units in all 50 states, as well as in Canada, Guatemala, Jamaica, and Peru.

“We know from experience that a woman who sees an ultrasound image of her child is highly likely to keep her baby,” said Knights of Columbus Supreme Knight Carl Anderson at the organization’s 135th international convention in St. Louis.

Anderson recounted a conversation he had earlier this year during the dedication of a pro-life pregnancy center in San Antonio. A nurse practitioner told him that the first woman to use the new machine said her mind was already made up in favor of abortion. “But then, as she watched the ultrasound,” recalled Anderson, “her baby turned and seemed to wave to her. She looked up at the nurse and said, ‘I’m going to keep my baby.’”

But the expense of an ultrasound machine and staff for its use are often prohibitive, usually costing tens of thousands of dollars, or in the case of a vehicle to serve as a mobile medical unit, from $100,000 to $250,000.

The Ultrasound Initiative plan is for local KofC councils to identify pregnancy centers in their area that are in need of ultrasound technology. The council then qualifies the center with their diocese. The council is required to raise at least half of the funds necessary to purchase the ultrasound machine through their own fundraising efforts.  The council applies to the Supreme Council (national organization) for the rest of the funding.

“Not only has this program saved the lives of countless children, it has also saved countless mothers from a lifetime of sorrow,” affirmed Anderson in his 2015 annual report. “And should someone ask why the Knights of Columbus does this, tell them the answer is simple: because we love them both.”