Why do Catholics call their main church services “Mass”? 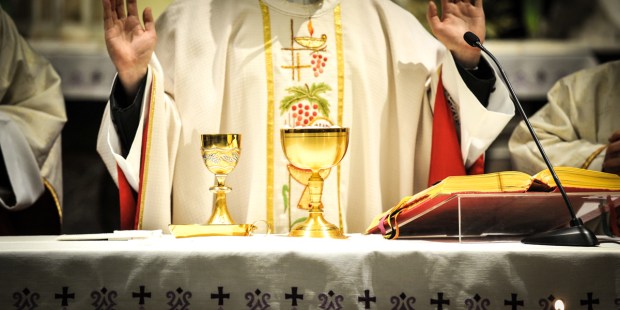 It is a strange word in English, and doesn’t adequately describe what takes place.

Catholics can have a weird vocabulary sometimes. When a Catholic needs to look up times for church services on Sunday they will look up “Mass Times.” Parishes also list Daily Masses, and Masses for Holy Days of Obligation. Even Catholic weddings and funerals most often take place as part of a Mass. For the cradle Catholic, this will be a no-brainer, but for the outsider, the word “Mass” can seem like strange jargon.

What does Mass mean and why do Catholics use the word?

The English word “Mass” comes from the Latin word missa, which means to be “sent.” This Latin word has been used since the 6th or 7th century to describe the Catholic celebration of the Eucharist, our main liturgical service. The word is used during the conclusion of the celebration, when the priest or deacon says in Latin, Ite, missa est.

:
Liturgical accessories for every church

The literal translation of that phrase is, “Go, it has been sent.” Saint Thomas Aquinas wrote a commentary on these words and explained in his Summa Theologiae, “And from this the Mass derives its name … the deacon on festival days ‘dismisses’ the people at the end of the Mass, by saying: ‘Ite, missa est,’ that is, the victim [Jesus] has been sent to God through the angel, so that it may be accepted by God.”

Read more:
Why, yes, missing Mass on Sunday actually is a mortal sin

Pope Benedict XVI also expanded on these words in his encyclical Sacramentum Caritatis, but focused on a different spiritual meaning behind the phrase. He wrote, “In antiquity, missa simply meant ‘dismissal.’ However in Christian usage it gradually took on a deeper meaning. The word ‘dismissal’ has come to imply a ‘mission.’ These few words succinctly express the missionary nature of the Church. The People of God might be helped to understand more clearly this essential dimension of the Church’s life, taking the dismissal as a starting- point.”

Instead of seeing the words of the priest or deacon as a conclusion to the celebration, Pope Benedict saw them as a beginning. He made that abundantly clear when he developed new words for the dismissal at Mass. Pope Benedict approved the phrases, “Ite ad Evangelium Domini annuntiandum (Go and announce the Gospel of the Lord)” and “Ite in pace, glorificando vita vestra Dominum (Go in peace, glorifying the Lord by your life).” Both of these dismissals focus on the missionary character of the Mass and how those in the pew are meant to go out in the world, sustained by the Eucharist they just received.

Viewed in this framework, the “Mass” is not just a single celebration on a Sunday or weekday or feast day, but a starting-point for a lifelong journey of Christian witness. The priest, in the place of Christ, sends forth his parishioners into the world so that they may be beacons of light, set on a hill for all to see.

Read more:
The sign of peace: The ancient roots of the greeting we make at Mass