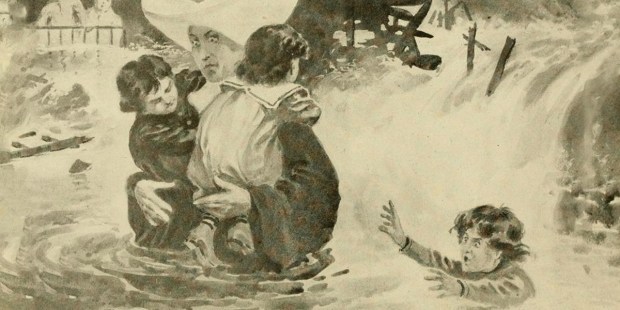 Surely these 10 are praying for us today!

Each time a big storm hits, and we brace for the untold damage in life and property, an account from history can remind us that heroes of the Church have always been at the service of both strangers and neighbors in times of adversity.

On September 8, 1900, in Galveston, 10 sisters of the Congregation of the Sisters of Charity lost their lives along with 90 children aged 2 to 13 in their care at St. Mary’s Orphans Asylum.

They were among 6,000 people who lost their lives in that hurricane.

The Sisters of Charity were in Galveston at the behest of Bishop Claude M. Dubuis, the French-born second bishop of the diocese from 1862 to 1892. In addition to caring for the many orphans who had lost their parents to yellow fever, the sisters also ran an infirmary, the first Catholic hospital in the state, established in 1867.

The orphanage was at first located within the infirmary, but the sisters had the opportunity to move it out of town, away from the threat of epidemics, to a beach-front location.

That location, while saving the children from disease, placed them in harm’s way on Saturday, September 8, the feast of the Nativity of Our Lady. The storm began in earnest that morning, and by the afternoon, portions of the orphanage were collapsing.

Using clothesline, the sisters tied between six and eight children to the cinctures which they wore around their waists.

But the dormitory was collapsing and there was no way for the sisters and the children to escape. Only three older boys survived, saved by being caught in a tree, where they floated for more than a day: William Murney, Frank Madera and Albert Campbell.

The sisters were found with the children still tied to them.

Read more:
Giving your life for another can lead to canonization, pope decides

On the anniversary of the storm in 1994, a marker was placed at 69th Street and Seawall Boulevard, marking the site of the former orphanage.

The song Queen of the Waves, which the sisters had sung with the children in prayer and to calm them, was sung again as part of the ceremony.

More details of the story and a recording of the song can be found here:

Queen of the Waves
from a French hymn, author unknown

Queen of the Waves, look forth across the ocean
From north to south, from east to stormy west,
See how the waters with tumultuous motion
Rise up and foam without a pause or rest.

But fear we not, tho’ storm clouds round us gather,
Thou art our Mother and thy little Child
Is the All Merciful, our loving Brother
God of the sea and of the tempest wild.

Help, then sweet Queen, in our exceeding danger,
By thy seven griefs, in pity Lady save;
Think of the Babe that slept within the manger
And help us now, dear Lady of the Wave.

Up to the shrine we look and see the glimmer
Thy votive lamp sheds down on us afar;
Light of our eyes, oh let it ne’er grow dimmer,
Till in the sky we hail the morning star.

Then joyful hearts shall kneel around thine altar
And grateful psalms re-echo down the nave;
Never our faith in thy sweet power can falter,
Mother of God, our Lady of the Wave.