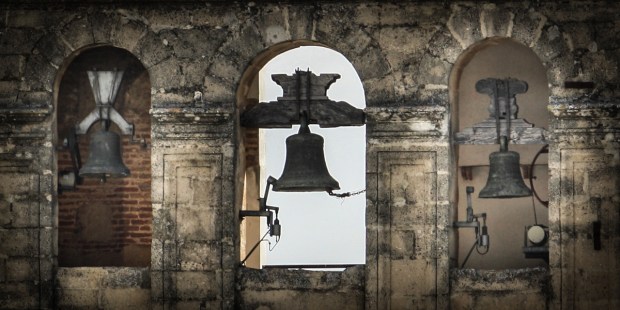 Bells not only call people to prayer, they have a spiritual weight that isn’t widely known.

In older cities, especially in the downtown area, bells ring out every hour from the steeple of the local church or cathedral. They are sometimes hard to hear in the hustle and bustle of traffic, but when visiting a country parish the bells can be heard from miles around.

Church bells have been around since the 5th century and were in common usage in the Middle Ages. They were particularly used by monastic communities to call the monks, who during the day were in various places in the monastery, to gather for prayer in the chapel. Later on the custom became more common in parish churches and the bells were used to call the people to the celebration of the Eucharist as well as the recitation of the Angelus prayer throughout the day.

Read more:
How to pray the Angelus for Lent

However, the church bells also have great spiritual power. When a new church bell is installed it is traditionally “baptized” or “consecrated” by the bishop or local priest. Former ceremonies mirrored that of baptism and the current ceremony still requires the use of holy water. The bells are also given a name in honor of a particular patron saint, though many are named after the Blessed Virgin Mary.

The Roman Ritual provides a very solemn blessing of church bells and it speaks of the spiritual symbolism and sacramental power these bells now possess.

God, who decreed through blessed Moses, your servant and lawgiver, that silver trumpets should be made and be sounded at the time of sacrifice, in order to remind the people by their clear tones to prepare for your worship and to assemble for its celebration. Grant, we pray, that this bell, destined for your holy Church, may be hallowed  by the Holy Spirit through our lowly ministry, so that when it is tolled and rung the faithful may be invited to the house of God and to the everlasting recompense.

Let the people’s faith and piety wax stronger whenever they hear its melodious peals. At its sound let all evil spirits be driven afar; let thunder and lightning, hail and storm be banished; let the power of your hand put down the evil powers of the air, causing them to tremble at the sound of this bell, and to flee at the sight of the holy cross engraved thereon.

May our Lord Himself grant this, who overcame death on the gibbet of the cross, and who now reigns in the glory of God the Father, in the unity of the Father and the Holy Spirit, forever and ever.

Note how the priest calls down God’s power to drive away “evil spirits” as well as “thunder … lightning, hail and storm” through the sound of these bells. The blessing continues with a final prayer that again recalls the spiritual weight the bells are given.

O Christ, the almighty ruler, as you once calmed the storm at sea when awakened in the boat from the sleep of your human nature, so now come with your benign help to the needs of your people, and pour out on this bell the dew of the Holy Spirit.

Whenever it rings may the enemy of the good take flight, the Christian people hear the call to faith, the empire of Satan be terrified, your people be strengthened as they are called together in the Lord, and may the Holy Spirit be with them as He delighted to be with David when he played his harp.

And as onetime thunder in the air frightened away a throng of enemies, while Samuel slew an unweaned lamb as a holocaust to the eternal King, so when the peal of this bell resounds in the clouds may a legion of angels stand watch over the assembly of your Church, the first-fruits of the faithful, and afford your ever-abiding protection to them in body and spirit.

We ask this through you, Jesus Christ, who live and reign with God the Father, in the unity of the Holy Spirit, God, forever and ever.

Did you catch that last line? The priest prays that “when the peal of this bell resounds in the clouds may a legion of angels stand watch over the assembly of your Church.” These bells are no ordinary bells!

So the next time you hear a church bell, remember the spiritual power it has and offer a short prayer to God, thanking him for the many blessings in your life.

Read more:
This is why churches have steeples