Princess Elizabeth and her husband on honeymoon at Broadlands, Romsey, Hampshire, 1947.

This royal pair can teach you a thing or two about what makes a marriage last.

Queen Elizabeth II and her husband Prince Phillip, the Duke of Edinburgh, celebrate their 70th wedding anniversary this November. Their story is one of love, achievement, sacrifice and maybe most importantly, of example. They have shown the rest of the world that the vows they shared in Westminster Abbey, London, 70 years ago were heartfelt and meaningful, and that their resolve in making their marriage work would lead to one of the most successful royal unions in history.

A sneak peek throughout the decades has revealed what could be the special ingredients to their marriage and perhaps an indicator to all of us in having a fulfilling marriage.

1. To your heart be true

Born in 1921, a very young Princess Elizabeth first met her dashing prince in 1934 at a cousin’s wedding — a very promising sign! Then when Elizabeth, or Lilibet, as she was affectionately known, was 13 they met at the Royal Naval College in Dartmouth and began to exchange letters. From this point a budding romance flourished. Although the union was frowned upon by some in the royal circle — Philip was seen as a bit of a poor relation and in post-war Britain his German connections were seen as suspicious — the princess knew that Philip was for her. Her determination to marry the man of her dreams came to fruition and the two got married in 1947. In the search of her Prince Charming, Princess Elizabeth showed us all the importance of finding true love.

When a couple ties the knot, two families come together to support them and any future children they may have. When Elizabeth and Philip got together, they not only brought their families together (although as distant relatives this seems a bit of a done deal), but they also unified the country. At a time of austerity and rationing, it was decided that this royal marriage could breathe a little life back into the nation. As Prime Minister Winston Churchill said the wedding was, “a flash of color on the hard road we have to travel.” The wedding dress designed by famous designer Norman Hartnell cost $1,500 (a staggering amount of money at the time), and 3,000 clothes coupons (fabric was still rationed due to wartime surpluses). Brides-to-be from around the country contributed their coupons to help create the beautiful gown in a show of unity with the princess. Although a modern bride today might not unify a country, or even spend thousands on her dress, it’s nice to remember that weddings can help unite communities and families. By committing to one another in front of God, you not only create a deep bond with one another, but a positive example for others, too.

3. The strength in mutual support

The biggest lesson the Queen and Prince Philip has shared with the world is the importance of mutual support. In the space of five years after their marriage, Elizabeth, the young mother of two, lost her beloved father, King George VI, and became Queen. Not quite what your everyday marriage has to endure — and all so publicly. Elizabeth turned to her husband for support and advice to fulfill her God-given duty. In return the new Queen helped her prince adapt to his role as consort. Over the decades of their marriage the couple has had to face such scrutiny in some very difficult times — just think of the very public divorce of Prince Charles and Princess Diana. The couple proved that the true test of a marriage is to unite when times get tough — a valid message to us all.

When Prince Philip got engaged to Princess Elizabeth, he had to convert from Greek Orthodoxy to Anglicanism, as well as become a British citizen. As a consort to the Queen he eventually had to give up on his promising naval career to accompany his wife on her duties. This must have taken a lot of strength, and love, and sometimes that sacrifice could have caused resentment. And yet, although in his wife’s shadow, Philip did his best to allow her to shine.

In turn Elizabeth tried to involve Philip in her work as much as possible. In this case it could never be a real marriage of equals as we know it, but more a marriage of equal respect for one another and a mutual desire to make it work. And we all know that a little R-E-S-P-E-C-T is key to any successful marriage.

5. Marriage helps us to achieve

Sometimes we might take our husbands for granted — I know I never have to change a tire or unblock the sink! However, as the Queen and Prince have continually shown us, when we are two we can achieve so much more. Not only can the royal couple shake more hands in a walkabout when they’re together, they can understand each other’s roles, and help carry the burden of the crown.

Who else can really appreciate what it must be like to wave constantly at strangers? Who else can understand how it feels to always be on show? To put country before self? The beauty of being in a couple is that it gives us the strength to go beyond our comfort zone and fulfill something together. If we remember to support and encourage one another, of course.

One of the secrets to Queen Elizabeth and Prince Philip’s long marriage has been a shared sense of humor. The two have often been photographed together giggling, from the beginning of their marriage up until now. So take the time to have a little fun together, remember a little laughter can go a long way.

Well, just look at the 91-year-old Queen and the very active Prince Philip, at age 95! As royals they might have a teeny bit more help in looking after themselves (personal chefs, etc.), but scientists at University College London did find that marriage helps men live longer — perhaps because they have a loving wife to make them eat their veggies!

The royal couple received over 2,500 wedding gifts and 10,000 telegrams from around the world.

Princess Elizabeth’s tiara snapped just as she was leaving to go to the service. The royal jeweler was luckily on stand-by and got it fixed.

Elizabeth did her own make-up.

Prince Philip asked for tea and coffee to be taken out to the waiting photographers at Kensington Palace.

See more lessons (and photos!) below: 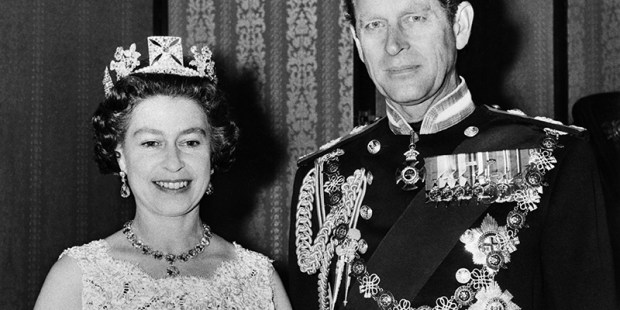