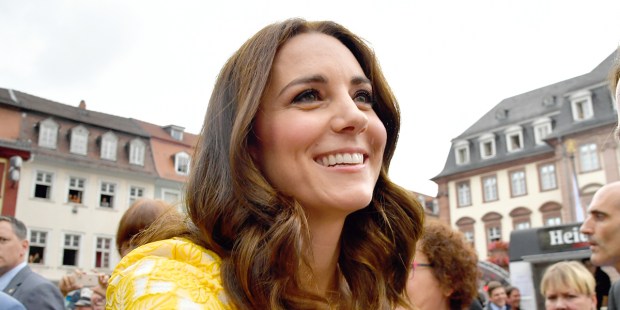 In an official announcement dated September 4, Kensington Palace announced that Kate Middleton is pregnant with her third child. As with her pregnancies with Prince George and Princess Charlotte, the Duchess of Cambridge is suffering from the debilitating medical condition called hyperemesis gravidarum, which stems from the Greek hyper, interpreted as excess; emesis, vomit; and the Latin gravida, pregnant. Unfortunately, the severe morning — or, in this case, all-day — sickness has led Prince William’s wife to cancel some of her upcoming official engagements.

It is only in more recent years, perhaps in part to the Duchess’s own experiences, that the illness has started to be better identified, managed, and understood. Nevertheless, it still remains a worrying condition that needs to be treated with professional care, since it means that, at a time when women should be enjoying their pregnancy, they are worn out with uncontrollable vomiting.

What exactly is hyperemesis gravidarum?

Hyperemesis gravidarum is an illness affecting between 0.5 and 2 percent of pregnant women. Its cause is still unknown, and its effects vary from woman to woman, as does its intensity. The condition can involve violent nausea from morning to night and very frequent vomiting (5 to 20 times a day); consequently, it can lead to an inability to eat and drink. To make matters worse, it often comes with abdominal pains, headaches, severe tiredness (asthenia), and difficulty sleeping, all of which does little to boost the mom-to-be’s morale. All of a sudden, any household task becomes impossible: taking a shower is a struggle, and looking after any older children is an ordeal. What’s worse, the nightmare doesn’t let up, and the hours seem to stretch into infinity.

Read more:
Should I change my diet during pregnancy?

Women who suffer from hyperemesis gravidarum complain that the condition makes it nearly impossible simply to read their other children a bed-time story. Sometimes they even have to call emergency services. Support from their immediate and extended family becomes indispensable.

Suffering with hyperemesis gravidarum has physical consequences for the mother: weight loss (at a time you should be gaining weight) and dehydration caused by excessive vomiting.  Luckily, thanks to treatment, the baby in most cases is not affected, “draining” the mother of all the nutrients it needs to develop.

Although hyperemesis gravidarum is often completely transitory and wears off towards the second trimester, hospitalization is sometimes necessary if the illness is protracted, leaving the mother too weakened. Testimonies from those who have experienced the illness point to one fact: it’s a nasty experience. Besides the condition itself, they also have to deal with a lack of medical understanding, as well as many prejudices. One mother remembers: “When I was admitted to the hospital I’d lost 13 pounds: I weighed 97. I was dehydrated and nearly unconscious. The nurse said to me, ‘Looking at you in this state, one would say you don’t care about what happens to your baby.’ My husband and I had been hoping for this pregnancy for five years!” Another mom-to-be went through a real ordeal: “I was in a dark room, with just one hour-long visit daily from my husband. The doctor insinuated that I hadn’t dared ask for an abortion, but that I wanted one.” However, once a psychological examination takes place, the conclusion is clear: the illness is not in the woman’s head, but truly in her body.

Once in hospital, the patient is typically put on an IV to be nourished, rehydrated, and given antiemetic treatment, which is often fairly strong. If the initial treatment isn’t effective, there are still options. Dr Nicole Bürki, a chief physician at the maternity unit in Liestal, Switzerland, explains: “Odansetron is used successfully in oncology to treat vomiting. We use it when a first round of antiemetics has been effective, and the symptoms are more severe.”

Read more:
Foods you should eat — and avoid — when you’re pregnant

Unfortunately, this is as far as medicine can go, as few strong medications are safe for the baby. The saddest thing is that some moms with hyperemesis gravidarum are so desperate from the symptoms that they end up having an abortion. In the United Kingdom, 10 percent of women suffering from hyperemesis gravidarum resort to this extreme. We can’t help but think that, given the time this condition has been recognized, science ought to have found a remedy, and those babies should have seen the light of day.

No miracle remedy but a few helpful tips

Non-medical measures used to combat hyperemesis gravidarum, such as breaking up bland meals into small amounts, eating a little ginger, drinking small amounts of liquids regularly throughout the day, etc., tend to provide little or no respite from the symptoms.

The best solution is to talk with your obstetrician about taking antiemetics, such as Diclegis (doxylamine succinate and pyridoxine hydrochloride) — the only FDA-approved drug to treat the pregnancy-related symptoms of nausea and vomiting — that can help with the feelings of nausea. You will need to track any weight loss, so that your obstetrician can determine any potential physical damage to you or the baby. In the worst case scenario, you may be admitted to the hospital to receive fluids and nourishment intravenously.

Dr. Marlena Fejzo, a faculty researcher in the department of Obstetrics and Gynecology at the University of California, Los Angeles, suffered terribly with hyperemesis gravidarum, which causes the hospitalization of 285,000 women each year in the US alone. She points out: “It’s the second most common cause for hospitalization of women during pregnancy, and yet, it is not considered as a serious problem.” Some women speculate that, if men were the ones getting pregnant, a cure would have been discovered long ago …