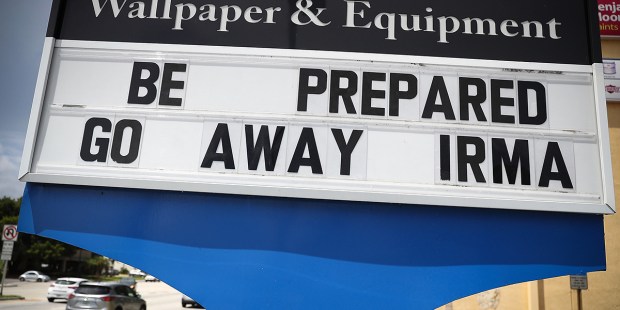 Those who are not evacuating are shuttering windows, stocking up and hoping for the best.

Prime Minister Gaston Browne of Antigua and Barbuda announced Wednesday afternoon that Hurricane Irma had destroyed 90 percent of all structures on Barbuda. At least one person was killed in the country.

Earlier, as the Category 5 storm passed over the British Virgin Islands, its wind speed persisted at 185 mph, the United States National Hurricane Center reported. The storm—one of the most powerful hurricanes ever recorded in the Atlantic—poses a major threat to life and property from the Eastern Caribbean to the Gulf of Mexico.

At least two deaths have already been reported on the islands of St. Martin and St. Barthélemy.

And Florida residents are either evacuating or doing their best to turn their homes into fortresses. It’s still too early to know where the storm will make landfall, but it might reach the state on Sunday morning.

“We feel differently about this storm,” said Diana Ennen, of Margate, Florida, close to Ft. Lauderdale, who has lived in Florida for 33 years and has seen some pretty bad storms. “I think most of Florida, we’re preparing a little more for this one just because of the intensity of it. The news has been pretty good in alerting people that even if we don’t get a direct hit we’re still going to be seeing some pretty major weather events.”

Ennen and her husband and son were preparing to stay in their home, which is about a mile from the Atlantic Ocean. She said that most people in her neighborhood were already shuttering their windows in preparation for the storm.

Also staying in their home are the Urban family of Boca Raton. Heather Urban has also been in Florida for three decades and, like Ennen, has vivid memories of Hurricane Wilma in 2005, which left her family without power for three weeks.

“That was really scary, but at the time we had a much older home and no shutters,” said Urban, who said that her family now lives in a house built under stricter construction codes after Hurricane Andrew, a Category 5 storm, hit Florida in 1992.

Both Ennen and Urban reported Wednesday that there was no bottled water left in stores, and lines at the gas station were very long. Both families are filling large containers of tap water to ride out the storm and any interruption of the public water supply in the wake of the hurricane. Ennen said her family was stocking up on canned food, as well as making sure important papers, such as insurance documents, medical records and wills, are in a weather-proof safe. She said it’s also important to leave instructions for medical personnel about what medications she and her husband are taking, and how rescuers might contact next of kin, if need be.

Also preparing for Irma are relief agencies such as Catholic Relief Services, which says it is ready to respond to emergencies in various parts of the Caribbean.

The northern coast of Hispaniola (the island shared by Haiti and the Dominican Republic) is low-lying and flood prone, CRS says. Working closely with local government and partners, including Caritas, CRS emergency response teams are on standby to quickly assess the needs and mount an immediate response in the affected countries.

In Haiti, CRS has a network of logistical and human resources, particularly in the capital, Port-au-Prince, and the southern area of Les Cayes—which was hit hard by Hurricane Matthew almost one year ago—and is ready to move personnel and transport and deliver relief items. In the north, CRS works through a network of local partners to reach at-risk communities.

As soon as the hurricane passes, CRS is poised to distribute pre-positioned relief items, including tarps, shelter repair kits, and hygiene and kitchen kits. If markets remain open, CRS will also assist families with cash to purchase necessary items.