“No life, except the life of Christ, has moved me so deeply as that of Peter Claver” 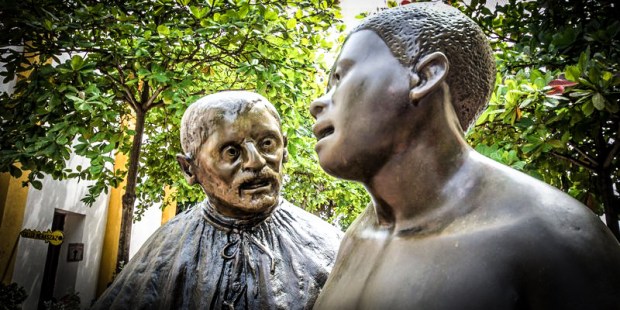 He couldn’t end slavery, but he could give his all to loving the slaves.

In the early 17th century, slavery was the law of the land. No papal condemnation or saintly exhortation would change that. In one Colombian city alone more than 10,000 souls were traded each year off the boats from Africa into the hands of masters who would further dehumanize them before working them into an early grave. And nothing could be done about it.

Peter Claver knew he couldn’t change the law; if even the pope’s prohibitions of slavery made no difference, the preaching of a single Jesuit would be useless. But Fr. Claver also knew that there are more ways than one to change the world. Some people (like Servant of God Bartolomé de las Casas) could reason with kings and berate governors, but others had to ignore reform for the time being and meet the individual soul. Some are called to fight slavery and poverty, others to feed and clothe and bathe slaves and the poor.

Born to a distinguished family in Catalonia, Peter Claver (1581-1654) was a very intelligent young man with a clear sense of purpose. By 21 he was a Jesuit; not long after he entered, St. Alphonsus Rodriquez had convinced him that God was calling him to the New World. Claver volunteered for the mission to New Spain, landing in Cartagena in 1610.

Latin America would never be the same. Claver handed his life over to the slaves so completely that when he made his solemn profession a few years later, he signed it “Peter Claver, Servant of the Ethiopians [Africans] forever.”

For 40 years, many of the inhabitants of Cartagena knew that a slave ship had arrived by one thing: the black-robed Spaniard racing to the docks, like the father of the prodigal running to meet his lost son. Though he knew he was facing filth and rage and decay, Fr. Claver rejoiced each time more of his people arrived because he delighted in serving them.

Those who had survived the Middle Passage were half-starved, packed like animals in the hold of a ship from which they had seen no sunshine in months. One in three died along the way, their corpses sometimes left chained to the bodies of the survivors. They were weak, terrified, abused, and, above all, degraded.

Into this sea of misery came Fr. Claver with food and medicine, blankets and bandages, interpreters, Sacraments, and dignity. He looked at each person as just that: a person, beloved by the Father and worthy of love and respect. “We must speak to them with our hands,” he said, “before we speak to them with our lips.” Though he could not free them, he could treat them with dignity and show others their value. And he could offer the gift of salvation, baptizing the dying and offering instruction to those who lived.

Fr. Claver baptized 300,000 people, rivaling even St. Francis Xavier, the great Jesuit apostle of the Indies. But he wasn’t content to cleanse their souls once and leave them to wander. After they were sold, he kept track of them, visiting them on their plantations, where he refused fine lodging built on the backs of slaves and slept instead with his people in their quarters.

The slave of the slaves formed a choir of Africans who sang liturgical music so heavenly that Spaniards wept and Muslims converted. He sat in the confessional for hours each day, visited hospitals and prisons, and bathed the wounds of lepers. He converted 600 captured Protestant privateers. He raised the dead. For 40 years, he held nothing back, his life handed over for people whose lives were stolen, bought, and sold.

But four decades of this work wore him out and he fell ill, unable even to leave his bed. Soon, the same city that had worshiped him forgot him, useless as he was. Starved and abused by a cruel servant, Fr. Claver endured four years of neglect, clinging to life until a replacement was sent to take up his work with the African people. Then, on the Feast of the Nativity of Mary, the slave of the slaves was called home to rule in the kingdom. His funeral was celebrated with all the fanfare owed to a king as the city that had once loved him mourned what they had lost.

On the occasion of his canonization, Pope Leo XIII said, “No life, except the life of Christ, has moved me so deeply as that of Peter Claver.” We who are moved would do well to follow his example, to seek out the people the world has abandoned, the elderly, the refugee, the unborn, the undocumented, and beg the Lord to make us servants after his heart.

On September 9, the feast of St. Peter Claver, let’s ask his intercession for racial equality in our nation and in our world and for the courage to fight for justice for those who are treated as subhuman. St. Peter Claver, pray for us!