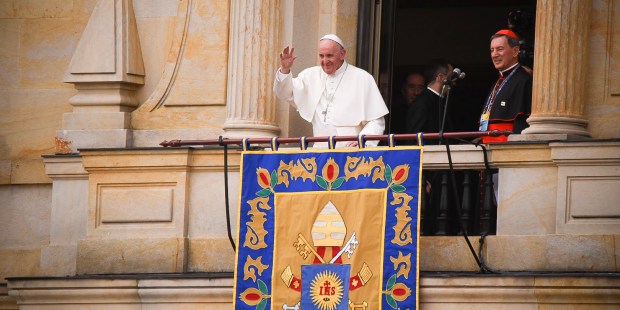 Sometimes it might seem that the pope is a distant figure, giving long speeches in far-away lands to people we can’t relate to. But just the opposite is true.

Some weeks ago I was with an old friend of mine who happens to now be a bishop. As he was talking to me about the headaches of his mission — mundane things like dealing with leasing agreements and an endless array of practical decisions — I felt like he could just as easily have been my neighbor, or my little brother, or a dad from my kids’ school. Sure, he’s a bishop, but the day-to-day of his life is really not so different from the day-to-day of my life.

Wasn’t that the great insight of Vatican II, and of so many of the saints?

It all boils down to love.

From St. Therese’s “in the heart of the Church, I will be love” to Mother Teresa’s “love begins at home, and it is not how much we do … but how much love we put in that action,” it all boils down to love.

I was reminded of this as I was listening to Pope Francis address the bishops of Colombia this morning. He’s in South America till Monday on a trip styled as a chance to confirm Colombia in its search for peace.

It was a long discourse, and somewhat uncharacteristically, he mostly followed his prepared text. But even when he’s reading a speech, he has a way of adding in a word or two, or repeating a phrase, to really emphasize that what he’s saying is coming from the heart.

One of the times he did this was in the lines where he was exhorting his brother bishops to care for their priests. And again, just as in the conversation with my bishop-friend, it struck me that his invitation to these Colombian bishops is just the invitation I need as a wife and mom.

Read more:
How watching Catholic bishops talk about Catholic layfolk had a surprising effect on me

“What can you give to your priests?” he asked them.

“The first gift,” he said, as rendered by the Vatican’s English translation (which is rather less vivid than the original Spanish), “is to be fathers to them, assuring them that the hand that begot and anointed them continues to be part of their lives.”

We live in the information era, he continued, and it’s not hard to reach our priests in real time just by sending a text message.

But an “occasional and impersonal” message is not enough, he insisted.

“Priests have a vital and urgent need for the physical and affective closeness of their bishop.”

And with emphasis on each word, he insisted, “They need to know that they have a father.”

That’s just what our kids need, too, right? Just what all of us need, in fact.

Read more:
The whole mystery of Christian prayer is summed up in this one word, says Pope

Another invitation that struck me as particularly beautiful was this one (and as he repeated the word “beg,” I couldn’t help but feel motivated to try harder in my prayer to get the graces my family needs):

Beg, beg in prayer when you find you cannot give anything, nor give yourself, so that you have something to offer those who constantly draw close …

Another point Francis stressed was an invitation to serenity. Not because you lack serenity, he told the bishops, but because the times in which you’re living need an extra quantity of this virtue.

That’s undoubtedly true for the bishops of a land clinging to a yet-tenuous peace after so many decades of war. But it’s also true for you and me, albeit on a much smaller scale, when it might just be toddlers or teenagers requiring of us a larger dose of serenity.

Sometimes it might seem that the pope is a distant figure, giving long speeches in far-away lands to people we can’t relate to. But just the opposite is true. It all boils down to love, and that’s the message the pope is giving to us all.

Read more:
How to Help Priests Smell Like Their Sheep

You can follow the live addresses from the pope’s trip at the Vatican’s YouTube channel. Or read the texts as they become available here.