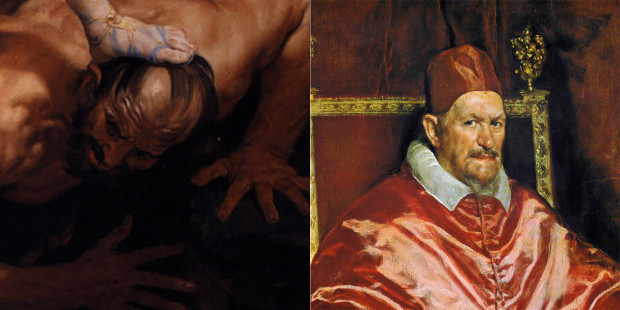 The face in the painting looked very familiar…

Guido Reni’s work, “St Michael crushing the devil,” might be one of the most famous depictions of the commander of the Army of God. This 17th-century painting, which can be seen in Santa Maria de la Concepcion Church in Rome, is indeed a tour de force, in which the Archangel is represented in extraordinary supernatural beauty. But not every detail in the masterpiece is beautiful or supernatural. Some might be considered ugly and human — all too human.

The painting was commissioned by Cardinal Barberini, a member of one the two most important noble families of Rome at the time. The other was the Pamphilii family, which was not exactly on the best of terms with the Barberini. In fact, these two family were at odds with each other.

The Pamphilii also had a Cardinal in the family, Giovanni Battista Pamphilii. It is said that Cardinal Pamphilii had defamed the artist, seriously damaging his reputation. Reni, resentful, decided to take revenge on the Cardinal. When his work was finished and presented to the public, everyone was astounded by the perfection and beauty of the angel, but also marveled at the face of the devil: they found quite a striking resemblance to Cardinal Pamphilii.

Of course, the Pamphilii demanded an explanation from Reni. This was the artist’s only reply: “It is true that I will never be able to do justice to angelical beauty, but I have seen the devil in the face, and that’s how I’ve painted him. Therefore, I won’t change a single thing.”