How the Roman practice of adoption sheds light on what St. Paul was talking about 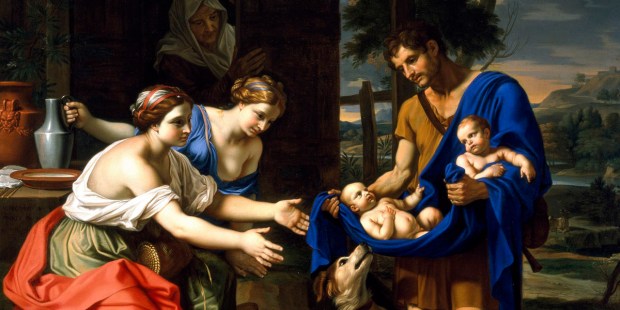 His line on “the Spirit of adoption, enabling us to cry out, ‘Abba, Father!'” speaks not only about us but also about God.

I grew up learning my catechism lessons, and always knew that we are children of God, who created us in his image and likeness. I was a little surprised, then, the first time I focused on the words of St. Paul in Romans 8:15:

Adoption is a beautiful reality. But I have to admit that the words rubbed me a bit the wrong way. If God is our creator, does his fatherhood seem a little less real or powerful if we speak of it in terms of adoption?

I decided to do a little digging.

There was no process for adoption in the ancient Jewish culture. If a man died, his brother automatically became the head of his household, so there was no need for a legal adoption process. The word adoption, during the time and context in which St. Paul spoke, referred to the Roman concept of adoption.

In ancient Rome, adoption had a powerful meaning. When a child was born biologically, the parents had the option of disowning the child for a variety of reasons. The relationship, therefore, was not necessarily desired by the parent, nor permanent.

Not so, however, if a child was adopted. In Rome, adopting a child meant:

An adopted child received a new identity. Any prior commitments, responsibilities and debts were erased. New rights and responsibilities were taken on. Also, in ancient Rome, the concept of inheritance was part of life, not something that began at death. Being adopted made someone an heir to their father, joint-sharers in all his possessions and fully united to him.

Think about what that means for us as Christians. Rather than diminish the beautiful reality of being children of God through creation, St. Paul’s theology of the spirit of adoption essentially doubles up on the power and significance of God’s fatherhood.

It is a constant reminder that we are fully desired, fully loved; that we have taken on a new identity through Jesus; that we were created for Heaven, but even now, are heirs to God, “co-heirs with Christ” (Rom 8:17).

For this reason, we can cry out, “Abba, Father,” from the core of our being. As a fuller reading of Romans 8 indicates, our nature as adopted sons and daughters of God is intimately bound up in the salvation Jesus won for us. It is through Jesus himself, the Son of God, then, that we are brought into sonship.

Abba, Father. I come to you through your son, Jesus. Thank you for knowing me, for loving me, for wanting me. Help me deepen my trust and confidence in you. Give me a childlike faith. Strengthen me in my identity as your beloved. Give me your blessing, your mercy and forgiveness. I ask you to walk with me throughout this day, and lead me to an ever deeper freedom, joy and peace that come from being rooted in the security of your love.