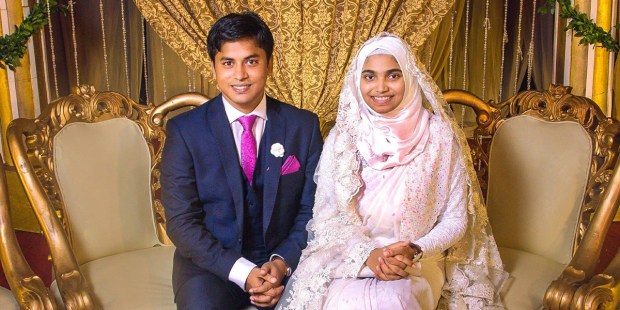 Many people didn’t approve, but Tasnim stood by her decision to resist the pressures of being a modern bride.

When Dr. Tasnim Jara arrived at her wedding reception adorned in a white saree and no make-up or jewelry, some of her own family members threatened not to take pictures with her because she didn’t look how they thought a bride should. But Tasnim was resolved in her decision, and her husband-to-be Khaled gave her his full support.

In a Facebook post, Tasnim explained her decision, writing, “I was troubled by the singular image of a bride that our society has — with tons of make-up, a weighty dress and mounds of jewelry weighing her down.” This is particularly the custom in traditional South Asian weddings. When a woman feels coerced into spending a certain amount of money to look a certain way, Tasnim wrote, it sends a message that “the authentic look of a girl isn’t good enough for her own wedding.”

So Tasnim decided to make a personal statement that, even as a bride, her natural beauty is enough for her and for her husband. Her post, along with her wedding photo, has over 25,000 shares, showing that her decision has struck a cord in the heart of many women.

Dr. Tasnim Jara is also the president of Aroggo, a non-profit which brings healthcare to those living in poverty in Bangladesh. This platform connects those in need with a generous person willing to donate towards their treatment.

Her empowering voice is encouraging women to reject the standards of the modern bride and embrace their own dreams for their wedding day.

Find out more in the video below.