In close-up: The sacred vessels and linens used at Mass 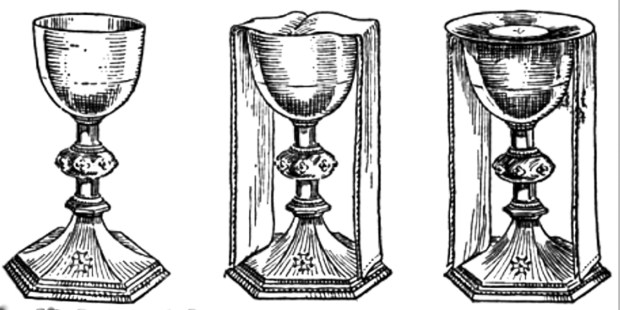 Centuries ago, the congregation did not see much of what was going on at Mass. Today, however, in the Western Church, the priest’s actions at the altar are in full view.

Most of us, if we weren’t altar servers or sacristans, got our one and only introduction to the sacred vessels and linens used at Mass when we were being prepared for our First Communion. In case that lesson has receded into the dimness of memory, here’s a refresher course on the objects used in front of your eyes at Mass.

There is a special order in the way these vessels and linens are assembled before Mass. The illustration below helps identify the various objects.

The chalice (from the Latin word calyx, or cup) is the cup into which wine and a little water are mixed. At the consecration of the Mass, the wine (that in the chalice as well as wine in a flagon to be poured into smaller chalices if the congregation will receive under both Species) becomes the Precious Blood of Jesus, in which Christ is truly present — Body and Blood, Soul and Divinity. The chalice is usually beautifully designed, and must be at least lined with precious metal as a sign of respect. In religious art, the chalice is sometimes shown at the foot of the cross, capturing the blood and water that flowed from the wound in Jesus’ side.

Read more:
The spiritual reason chalices are made from precious metal

Over the chalice is laid the purificator, a fine white linen cloth that is used to wipe the lips and fingers of the priest and to cleanse the chalice after Communion. The sacristan — the person who cares for the sacred vessels and linens — cleans the purificator separately from other linens after Mass, because it holds traces of the Precious Blood.

The paten (from the Latin word for pan or plate) is a saucer-like circular dish of or lined with precious metal. At Mass, the priest places the large primary host on the paten, where at the consecration it (and other smaller hosts to be received by the congregation, held in a container called the ciborium) becomes the Body and Blood, Soul and Divinity of Jesus Christ. Where congregants receive Communion on the tongue, a server may hold a plate (also called a paten) under the communicant’s chin, so that no consecrated host or particle falls to the ground. In preparing the vessels for Mass, the paten with the large unconsecrated host is set atop the chalice, with the purificator underneath it.

Before the offertory of the Mass, the chalice is covered with a square of linen stiffened with cardboard. This covering, called the pall (from the Latin word for “cover”) keeps foreign objects — like dust or insects — from falling into the chalice or onto the paten and contaminating them.

The prepared chalice, purificator, paten, and pall are then covered completely by a veil — a piece of fabric that reflects the liturgical color of the priest’s vestments and is sometimes embellished with an appliqued or embroidered cross. The veil hides the sacred vessels from view. Fr. Jerry Pokorsky explains how the veil “reminds us of the curtain setting apart the Holy of Holies, and prompts us to approach the altar aware of our unworthiness to enter into union with God.” Additionally, “The removal of the chalice veil is one of the first liturgical actions at the Offertory in preparation for the reception of the gifts of bread and wine from the congregation. The removal of the veil following the Liturgy of the Word signifies that the sacred mysteries are about to be revealed. Again, this action is a symbolic echo of the Scripture: ‘And Jesus cried again with a loud voice and yielded up his spirit. And behold, the curtain of the temple was torn in two.'”

On top of the veiled vessels is placed the burse (from the Latin for bag or container), a square sack also made in the liturgical color of the season, and may also be embellished with a cross.

The burse is a container for the corporal, a square piece of fine white linen that will be placed on the altar underneath the chalice and paten. The corporal takes its name from the Latin word for body, because the Body of Christ will rest upon it.

The next time you are at Mass, watch during the Preparation of the Gifts as these sacred vessels and linens are unveiled and readied for the Eucharistic Prayer.