Identical twins give birth within hours of each other 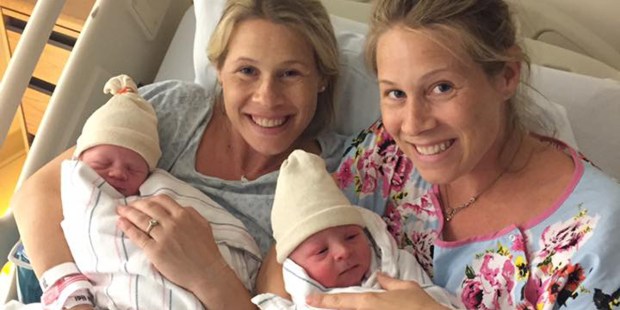 When one sister didn’t make her due date, it was time to turn to twin power!

Identical twin sisters say they used their “twin power” to deliver their babies only hours apart. Rachael McGeoch and Beccy Pistone were excited when they found out their due dates were only 13 days apart, according to Mount Auburn Hospital in Cambridge, Massachusetts.

“We talked about how awesome it would be to go into labor the same day and be in the same place,” McGeoch told WHDH news.

Read more:
My Twins Are Going to School Next Year: Should I Separate Them?

But with the sisters living 87 miles apart in Massachusetts, they wondered if it would be possible.

“I wanted to give birth by midwife so I chose Mount Auburn Hospital,” said McGeoch. “Hoped to convince my sister to do the same, but she lives on the Cape, so she and her husband wanted to have their baby on Cape Cod.”

When McGeoch didn’t make her August 1 due date, she decided to schedule an induction on her sister’s due date, the 13th. So Pistone and her husband made the two-hour drive to meet McGeoch at the hospital, where Pistone soon started having contractions.

“We thought if we could just get together then we would both go into labor,” McGeoch said.

And they were right! Twin power at its finest.