How dealing with difficult people can make you a better person 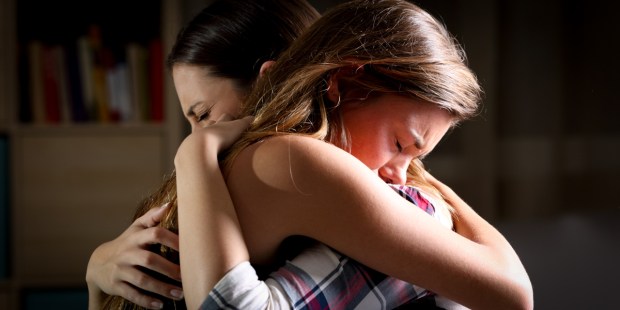 Our willingness to forgive others is essential for our own spiritual journey.

Peter approached Jesus and asked him,
“Lord, if my brother sins against me,
how often must I forgive?
As many as seven times?”
Jesus answered, “I say to you, not seven times but seventy-seven times.”
—Matthew 18:21-22

Anger is a reality in life. However, as we know, anger is like any other emotion and can ultimately be used for good or for ill. Anger that is destructive is like acid that corrodes and eats away at our relationships and our very selves. Righteous anger, however, is that anger that we feel when we are confronted by injustice. This kind of anger can inspire us to respond to that injustice by speaking out and channeling our energy to work for good.

One of the other realities of anger is that we are never angry in isolation. Anger is an emotion that is rooted in relationships.

Think about the times in your life when you’ve experienced anger. Most often, it is because someone has done something—or not done something—that has hurt or inconvenienced you in some way. You aren’t angry at nothing. Rather, your anger is directed at someone. The same can be said of the anger and disappointment we feel when we experience or encounter injustice. Even if it is a world away, the suffering of others is most often caused by the actions of others, especially when power and authority are abused. We can also be angry at God.

Our Gospel this Sunday is a continuation of passage we heard last week from the 18th chapter of Matthew’s Gospel. And, as I observed then, the insights Matthew shares come from the experiences of a real community made up of very real women and men who came into conflict with one another. And so, Peter’s question this Sunday isn’t an academic exercise. Instead, Peter stands in for each of us, asking Jesus at what point we can stop doing the hard work of forgiving someone.

I imagine that Peter thought he was being more than generous by proposing “seven times” as the high number for times to forgive. Jesus, however, has other ideas. He tells Peter—I imagine a gentle, almost sympathetic tone in Jesus’ voice—that seven times isn’t enough. Instead, we are to forgive as many as seventy-seven times.

What is at stake in our Gospel for this Sunday is the integrity of the community. When we have been hurt or offended by someone, we don’t have the luxury of simply writing them off. Whether we think of the life of the Church or our own social circles, we have to believe that God, in his Providence, has placed each person we know in our life for a purpose. Perhaps it is to help us along life’s journey, or we might be called upon to support them. Some people are in our lives to help us laugh at ourselves, while others have the gift of helping us to recognize the ways that God’s grace is at work for us.

My years of living in religious communities have also helped me recognize that God sometimes places difficult people in our lives to help us remember that we aren’t the center of creation. Remember, we have rough edges just like everyone else and its only by allowing our rough edges rub up against the rough edges of others that we can be worn smooth.

The invitation for us this Sunday is to reflect on those times when, like the servant in the parable, we have experienced forgiveness from God and from others and to share that gift with those against whom we might be holding a grudge. After all, the words of the Lord’s Prayer remind us that our willingness to forgive others is essential for our own spiritual journey: “Forgive us our trespasses, as we forgive those who trespass against us.”

Prayerfully reflect on any grudges or past hurts that you might be holding onto. How might you work towards healing and forgiveness?

Why is forgiveness so important for the life of the Church?

When have you experienced the healing power of forgiveness in your own life?