Hildegard of Bingen: A woman who reproached both popes and kings 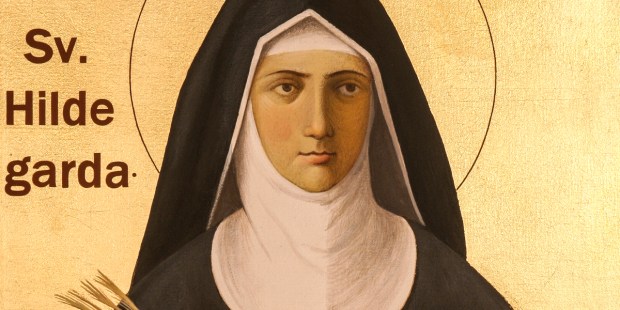 Benedict XVI proclaimed her Doctor of the Church in 2012.

Women must not be “reduced to servants of our recalcitrant clericalism.” Pope Francis reiterated this point on his trip to Colombia (September 6-11, 2017). Hildegard of Bingen (1098-1179) already understood this clearly. She was a Benedictine nun, a mystic, theologian, foundress, writer, expert in pharmacology, cosmologist, composer, botanist, doctor … and she maintained correspondence with popes, bishops, kings, and emperors. If she needed to reproach them for anything, she didn’t hesitate to do so.

San Pablo Ediciones has just published a book about the unique mystical experiences of this great woman, whom the author, Cristina Siccardi, calls a “mystic and scientist.”

Saint Hidegard’s mysticism isn’t one of ecstasy; she “always remains rooted in the world, even when the supernatural bursts into her life,” the author says.

Hildegard’s manuscripts are in Latin and German, and her work has been carefully studied, especially by Benedictines and experts in medieval prophetism and mysticism. When Benedict XVI dedicated several of his catecheses to important women in the Church, the first example he chose was, in fact, Hildegard.

Experts agree that she was not a normal child. From when she was very young, “she saw beyond what was visible to the eye.” She herself relates, in her work called Scivias (“Know the Ways of the Lord”): “Since I was a child, specifically since I was five years old, and still today, I have always mysteriously experienced in my interior the strength and mystery of those hidden and secret visions.”

In Vida y Visiones de Hildegard von Bingen, published by Siruela, Victoria Cirlot, professor of medieval literature at Pompeu Fabra University in Barcelona, Spain, states that Hildegard is “one of the most fascinating and multifaceted figures of Western Europe.”

One aspect of her personality was that “she wasn’t intimidated by criticism,” but neither did she “allow herself to be led astray by praise.”

Another text, the biography of Hildegard written by Theoderich of Echternach—included in Cirlot’s book—quotes these autobiographical details the saint mentions while describing a vision:

“And in my third year I saw such a light that my whole soul trembled; but because of my young age I could not put it in words. At the age of eight, I was offered to God for the spiritual life ; and until I was fifteen I saw numerous visions and spoke many things about them in a simple way.”

The young Hildegard entered the religious life, but didn’t tell her fellow nuns about her visions. Later on, she shared her visions with Jutta of Sponheim, who was an anchoress, Hildegard’s tutor and, later, her abbess; and with a monk, Guiberto de Gembloux, who became her secretary. Hildegard’s fame became widespread. She had a group of friends with whom she shared her revelations, which she began to write down in 1141.

Hildegard lived in Disibodenberg for 30 years, following the Benedictine rule. She had an important impact in various fields of study (mysticism, medicine, music, cosmology), and her influence was notable and admired.

Among the characteristics of this Doctor of the Church, according to Siccardis, are the fact that she was “extremely rational” and “never looked for shortcuts, nor was one to be fooled.” She was a person who “examined and analyzed problems.” She was a “very balanced” person who managed to maintain the same strength of spirit in times of happiness as in those of suffering.

Hildegard’s best-known works are her Liber Scivias (“Know the Ways of the Lord”), Liber Vitae Meritorum (“Book of Life’s Merits”), and Liber Divinorum Operum” (“Book of Divine Works”). She also composed dozens of pieces of liturgical music, and wrote works on science and medicine.

Among her many-faceted achievements as a writer are included the letters she wrote to Pope Eugene III and St. Bernard of Clairvaux.

Her relics are found in the parish church of Eibingen, Germany.

September 17, 2017, is the 838th anniversary of St. Hildegard’s death. She died with her fellow nuns at her bedside at a convent in Rupertsberg, which is no longer standing. She was, without a doubt, the most powerful woman of the late Middle Ages.