Millennial and monastic: It doesn’t get more counter-cultural than that 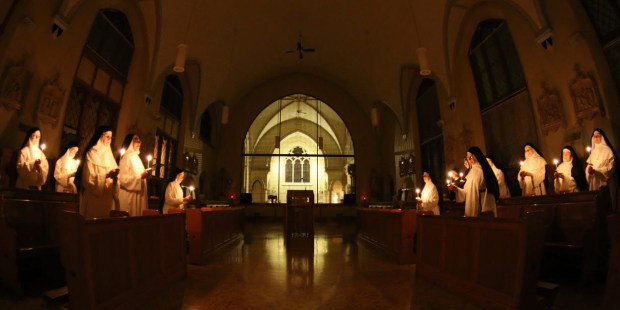 When compared to the giddy heights of the Catholic vocational heyday that was the mid-20th century, current numbers of priests and religious will always pale in comparison, Any honest discussion of these numbers, however, must acknowledge that the heights were an anomaly that perhaps owed as much to the effect of a fairly sympathetic and increasingly available press — and the heroic portrayals of priests and religious in books and movies — as anything else.

In the case of Catholic women, education and unprecedented career opportunities for young women worked as something of a one-two punch to the solar plexus of religious vocations. Some years ago, a Capuchin involved in a research project confided to me that the projected numbers for women religious looked so dire that “we may not have any monastics left by 2020.”

Fortunately, after decades of gasping, the seminarian numbers are beginning to climb, and religious vocations appear to be regaining their wind and rising from the mat, although not without problems. “We’re missing a generation of vocations,” says Mother John Mary, superior of an enclosed Passionist community in Kentucky. That brings a measure of complication; some communities who are enjoying strong growth find that their experienced, professed sisters are outnumbered by those still in formation. “There are not many sisters to whom I can delegate,” Mother John Mary says.

Still, it is noteworthy that millennial women — most of them gifted, well-educated, and able to consider a broad array of career and lifestyle paths — are making the very ancient choice to spend their lives in prayerful enclosure.

Read more:
What Is the Use of Monasticism?

Perhaps nothing better clarifies the solemn, powerful, and unique value of entering into such a vocation as the words pronounced over a Dominican nun (a moniales in the Order of Preachers) at the time of her first profession when she takes on the black veil, signifying that she has become “recognized as a house of prayer…and a temple of intercession for all people.”

Father Aquinas Guilbeau recently had the opportunity to talk to three such enclosed moniales — all “millennial” women — who are living out their lives within growing contemplative communities in New York, Virginia, and Alabama. Their conversations focused on their vows, and how the governance of monastic family brings its own kinds of freedom and challenges, and these young sisters had a lot to say. (Read Part II, here)

Millennials without smartphones and apps

But asking millennials about specific concepts associated with their generation was an irresistible place to begin, as Fr. Guilbeau did. How do these young religious, raised with smartphones and exposed to the social media trends that give ersatz “meaning” to so many, deal with the absence of all that, he wondered?

For a nun of St. Jude’s Monastery, in Marbury Alabama, it’s not even an issue. “Many cloistered communities today use technology and media to different degrees depending on their particular way of life,” she responded thoughtfully, “[but] this question brings up a significant insight. In the cloister, we live very close to ourselves, each other, and God. We spend no time building an online ‘persona.’ Thus our lives acquire meaning in the freedom of our utter dependence on God.”

For a contemplative, then, electronic fasting is a way of life. But what, she was asked, do the fruits of that fast promise to those still ‘plugged in’?”

“The interior life,” she answered simply. “Interior silence is the first step to living an interior life. I came into the monastery from a very internet-saturated lifestyle … God was certainly drawing me, but I didn’t have much interior ‘space’ to hear Him, to be present to Him. The stillness and ’emptiness’ of life in the cloister was a big change for me, and very striking.” She noted a line from Georges Bernanos, quoted in Cardinal Sarah’s book God or Nothing: “We understand absolutely nothing about modern civilization if we do not admit first of all that it is a universal conspiracy against any type of interior life.”

Millennials and marriage, a different concept

The number of U.S. millennials who enter into marriage is steadily decreasing, and very little millennial thought is spent pondering deeply on the point and purpose of virginity. Father Guilbeau brought that up to a nun from St. Dominic’s Monastery, in Linden, Virginia, wondering. “How is the ‘nuptial mystery’ of human life lived out in the cloister? How are you, as a woman, a ‘bride’ and ‘mother’?”

“I am a bride in the sense that I have been wholly given over to Christ through my religious profession of vows. A real and unbreakable bond has been forged between us, so much so that the Church does not hesitate to acknowledge this as a kind of nuptial covenant.”

“Like any bride,” the sister continued, “I desire to give my Spouse children — but on the supernatural level.”

This maternity, she acknowledges, is purely a product of grace. “I believe that God indeed uses my life for the good of souls. It was revealed to St. Teresa of Avila that more souls were saved through her hidden life of prayer and penance than were saved through the apostolic efforts of St. Francis Xavier (who reportedly baptized tens of thousands of souls!). I simply believe in faith that he who has made me a special kind of bride also makes me a special kind of mother.”

Forsaking a natural marriage and family life for a supernatural one means genuine sacrifice. “No husband, no children,” she notes with wry humor. “No cozy hearth and home, no family vacations, no hope of grandchildren, no experiences of physical affection with spouse or offspring … Yikes! That can sound pretty dismal. After hearing that who would say, ‘Sign me up!’? Yet people do [and have been] ‘signing up’ for nearly two millennia!

“Evangelical chastity witnesses, first, to the fact that [the pearl of great price] EXISTS and, second, that it’s worth selling everything in order to possess it. In addition, the world need not see me nor hear me in order to receive that witness. The monastery itself stands as witness. It says: God is worth it. Yes, I can say without flinching: God is worth it.”

Millennials not losing their religion

Mindful of studies suggesting that millennials call themselves “spiritual” while distrusting religion, a nun from the Monastery of Our Lady of the Rosary, in Buffalo, New York, says, “True spirituality is inseparable from true religion,” and shared what she has discovered about religion that might reassure members of her generation.

“Think about it this way: Outward conformity to a litany of commands doesn’t make people happy. It is transformation of our spirit that we desire—harmony within ourselves, harmony with each other, harmony with God.” How is that done? How, she puts forward, can we achieve lasting peace with our neighbors, much less friendship with One who is so totally “other”? “The answer is simple: We can’t! God, however, can, and that is what He does, sending His Son and His Spirit to draw us to Himself.

“Religion is thus not a burden but a gift,” the young nun insists, “[it is] the Jacob’s ladder, as it were, by which God comes down to us and leads us back to Him. As a contemplative nun, I experience this gift with special intensity. Just imagine living with 10 or 20 very different women, cloistered for life. Impossible! — were Christ not present at the heart of our home, guiding us, teaching us, loving us, forgiving us.

“The grace of His word and of His sacraments is real,” she concludes, “and it is powerful indeed!”

Power, however has nothing to do with why any of these women entered monastic life. Rather, they were attracted by joy, and by a promise of freedom, albeit a paradoxical one, that the world cannot give.

“I was over in Krakow in 2008, studying Catholic social teaching with the Polish Dominican friars,” shared the Buffalo sister. “I’d been quietly discerning a vocation for several years, but somehow hadn’t known that the cloistered life was still alive and vibrant in the family of St. Dominic. Yet here we were, young people of the third millennium, peering through an iron grille at women clad in a medieval habit, and … they weren’t so different from ourselves. One young nun spoke English and served as our interpreter, though the laughter of the evening needed no translation. The nuns were happy! It was then that the little seed of my cloistered vocation stirred to life. Behind that grille was a foreign land, a mystery of faith. But the glimpse I’d had told me that theirs was a beautiful life, hidden with Christ in God.”

“The cloister was nowhere on my radar,” said the nun at Linden, who, as a nursing student, had envisioned herself married, with a family. A religious conference inspired her to dare God to “ruin my life,” and then it seemed all she wanted was the freedom to make her life with him. “That’s what initially drew me to the monastery. I simply wanted to be with God.”

In the outside world she found herself unable to do that. “Let’s face it: we live and breathe in a culture that is largely anti-God. I found myself fighting a constant uphill battle. Surely, I thought, there must be an easier way! A monastery is like a little oasis of the sacred in the midst of our secular world. It frees us from the noise and distractions which turn our attention away from ‘the one thing necessary.’ Here I am free to simply be with God.”

“’Growing up’ would capture it, I think,” answers the sister at Marbury. “My mother had us spend half an hour every day reading the Bible. Over time, I clearly heard in Scripture the call God extends to every human person: the invitation to quench our thirst at the fount of living water. … I wanted to respond to this call by living totally for God.”

The cloistered contemplative vocation did challenge her, though. “I always wanted to be a teacher. In fact, I taught 5th and 6th grade that next year while applying to enter the monastery.” Still, “In the words of one of our sisters who died right before her 90th birthday, after 70 years in the monastery: ‘It’s been the best life.’”

Read more:
Young nuns have some advice for their millennial peers

Read the full Q&A with the Linden, VA monastery here

Read the full Q&A with the Marbury, AL monastery here

Read the full Q&A with the Buffalo, NY monastery here