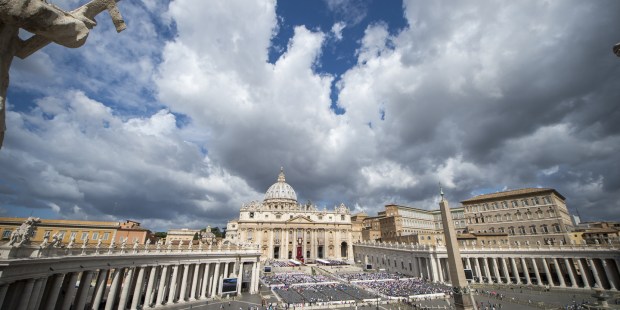 Tourists who visit St. Peter’s often miss out on the archaeological finds under the Basilica.

Pope Pius XI’s will stated he wanted to be buried as close as possible to what tradition has considered to be the tomb of St. Peter. Pius XII then began the excavations under St. Peter’s Basilica, in order to fulfill the last will of his predecessor. With that single gesture, he also showed confidence in both archaeological science and the countless generations of Christians who had considered the Basilica as, indeed, the burial place of the Apostle.

After the excavations, which were followed by exhaustive historical, archaeological and architectural studies, Pius XII ended the jubilee of 1950 exclaiming: “The final conclusion of the works and studies carried out in the Basilica is a very clear ‘yes’: the tomb of the Prince of the Apostles has been found.”

From the Circus of Nero to St. Peter’s Basilica

After the fire of Rome in 64, Emperor Nero started a new Christian persecution, during which — according to tradition — St. Peter was crucified upside down, in the circus (an oval ground used for racing and other public spectacles) located in the Vatican Hill. The body of the saint was then put to rest in a tomb under a small roof tile, in the pagan necropolis on the very same hill. Quickly, as the necropolis stretched to the banks of the Tiber, St. Peter’s burial place began to attract pilgrims, even if discreetly at first.

In the 4th century, Emperor Constantine allowed the development of Christian worship and decided to build a basilica in honor of St. Peter, its altar being aligned with the tomb of the apostle. Above the original tomb, Constantine had a monument built, three meters high, in marble and porphyry, of which a column and a section of wall are still preserved. When the present majestic basilica was built, the papal altar was then placed on top of the tomb of St. Peter.

The relics of St. Peter

In 1941, a box containing bones found not far from the tomb, in a small niche (a loculus) near one of the walls of Constantine’s original monument, was uncovered. A decade later, during the second excavation campaign, from 1952 to 1958, an Italian archaeologist, Margherita Guarducci, discovered a Greek inscription that read “Peter is here” on a fragment of that very same wall.

The box was then brought back to the lab, in order to analyze the skeletal remains contained in it. The analyses found that the bones corresponded to a man of robust construction, of advanced age and with signs of osteoarthritis, a common disease among fishermen. Some remains of purple cloth, sewn with gold threads, were found wrapped around the bony remains, an indisputable sign of veneration. The alleged bones of the apostle had been slightly displaced from the tomb to the loculus, no doubt by Christians willing to prevent all defilement. The remains were dated as belonging to the 1st century.

Read more:
Relics of St. Peter are thought to be found in Roman church

On June 26, 1968, during a hearing, Paul VI declared: “The relics of St. Peter have been identified in a way that we consider convincing.” Most of the remains were then deposited in the loculus, except for some of the relics, which were destined for the pope’s private chapel.

Nowadays, the excavations (the Scavi, as they’re known in Italian) are accessed by an entrance located next to the sacristy of the basilica. Just beside the entrance, on the ground, there is a square that marks the location of the obelisk erected in the past in the center of Nero’s Circus.

Visitors descend a narrow staircase in order to get to the pagan necropolis, and walk through the mausoleums of several Roman families, before arriving at the place in which the relics of the apostle are preserved. Exactly under the altar of the basilica, topped with Bernini’s famous baldachin, in the exact center of the dome of Michelangelo, in a hollow carved on a stone wall, are the humble remains of the first pope.

Visits to the Scavi are made by reservation. The Vatican website also offers a virtual tour here.