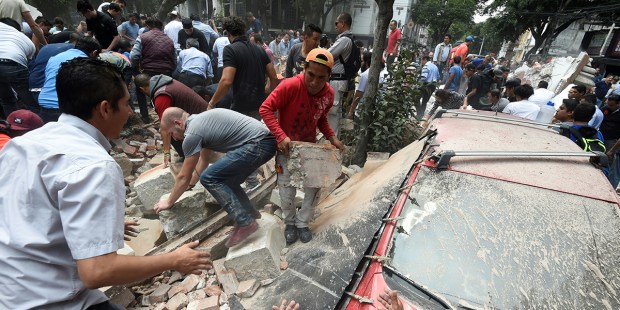 Less than two weeks after 8.1 quake, a 7.1 magnitude temblor strikes on anniversary of 1985 devastation

A 7.1 magnitude earthquake struck Mexico Tuesday afternoon, 32 years to the day after a devastating quake in Mexico City.

By Tuesday evening, the nationwide death toll stood at 119, exceeding that of a powerful earthquake in the southern part of the country less than two weeks earlier. The Associated Press reported the Mexican government saying 30 of the fatalities were in the capital.

The New York Times reported that 20 buildings in Mexico City had collapsed. There was particular concern about a primary school housed in a four-story building that had collapsed. Four children were saved from debris of the Colegio Enrique Rebsamen in Coapa, Mexico City, but more children reportedly remained stuck in the rubble.

Earthquake drills had been conducted Tuesday morning across Mexico City, on the anniversary of the 1985 earthquake that killed upwards of 10,000 people. Tuesday’s quake, which happened at 1:14pm local time, was centered in the town of Raboso, in the state of Puebla, about 76 miles southeast of the capital.

Office workers rushed into the streets, and furniture and household items came crashing down in some homes. Residents said the shaking they felt on Tuesday was far worse than what they had felt from the quake less than two weeks ago.

Social media quickly filled up with images and videos of building collapses in Mexico City; a major explosion, and people in boats being rocked by strong waves on a lake that is normally placid. The city experienced heavy and prolonged shaking. Foro TV Tuesday afternoon, was showing first responders, bucket brigades and search-and-rescue dogs working through rubble.

The Times reported that in the neighborhood of Roma Norte, an entire office building collapsed:

Rescue efforts at the offices were getting underway to save people trapped in the rubble. Several people suffered injuries and were quickly whisked away in ambulances. Others lay on the ground covered in dust.

Other buildings in the neighborhood, which is vulnerable to earthquakes given its location on top of soft earth, were believed to have fallen as well.

Broken gas lines became a concern throughout the city. At a market in Roma Norte, a worker in a hardhat walked around the outside warning people not to smoke as a smell of gas filled the air, ABC News reported:

Market stall vendor Edith Lopez, 25, said she was in a taxi a few blocks away when the quake struck. She said she saw glass bursting out of the windows of some buildings. She was anxiously trying to locate her children, whom she had left in the care of her disabled mother.

Much of Mexico City is built on former lakebed, and the soil is known to amplify the effects of earthquakes even hundreds of miles away, the network explained.

In an expression of support for Mexico, President Donald J. Trump tweeted at 4:05pm that the United States “will be there for you.”

God bless the people of Mexico City. We are with you and will be there for you.