Bishops of Canada reconsecrate country to Immaculate Heart of Mary 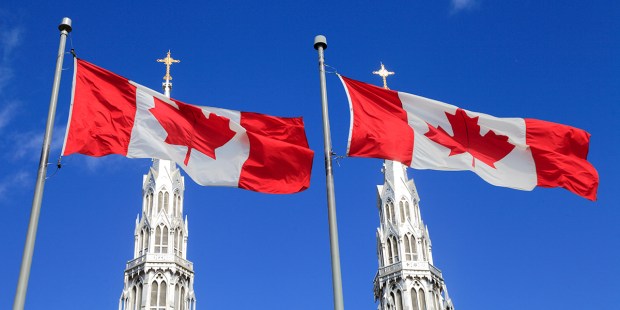 The solemn ceremony renewed a consecration first performed 70 years ago.

On September 26, Canada’s three cardinals led an assembly of bishops in renewing a consecration of the country to the Immaculate Heart of Mary. The ceremony was in honor of the country’s 150th birthday, and was a renewal of a similar consecration that occurred 70 years ago.

According to the Catholic Register, the three cardinals “standing near a portrait of Our Lady of Canada painted by the late Quebec artist Marius Dubois … led more than 80 bishops and eparchs and hundreds of lay faithful in the consecration prayer at Ottawa’s Notre Dame Cathedral Basilica.”

The consecration occurred in the context of a Mass celebrated in honor of the Canadian martyrs. Ottawa Archbishop Terrence Prendergast said in his homily that he hoped through the consecration “our country may be protected from the horrors of war and that our people may be more open to welcome into their lives the Good News which is not a doctrine or a philosophy, but is Someone: Jesus Christ.”

The cardinals and bishops prayed the following prayer during the consecration.

May the Cross of your Son, planted on Canadian soil and in Canadian hearts, be known as the Tree of Life, whose fruit is visible and available to all in the garden of this world.

Mary our Mother, we place our country Canada in the sanctuary of your Holy Heart for we know that there we will find Jesus, who lives and reigns with the Father in the unity of the Holy Spirit, one God, forever and ever.

The first consecration of Canada to the Immaculate Heart of Mary occurred at the 1947 Marian Congress in Ottawa and was a large gathering, attracting thousands of pilgrims.

According to the Catholic Herald, “The Mass also marked another milestone in Canada, the 50th anniversary of Development and Peace, the Canadian bishops’ overseas development agency, founded in 1967.”

Cardinal Lacroix said, ‘Today, in this golden jubilee, we give thanks to God for so many people who have worked and who continue to be committed to building a more just world.”

The consecration occurs during the 100th anniversary of the apparitions at Fatima and comes in close proximity to a similiar consecration of Scotland to the Immaculate Heart of Mary.