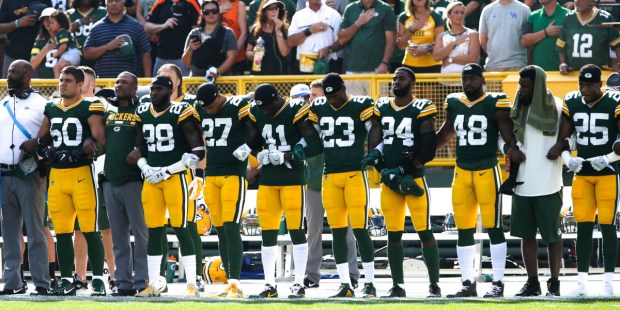 Dylan Buell | Getty Images North America | AFP
GREEN BAY, WI - SEPTEMBER 24: Members of the Green Bay Packers stand with arms locked as a sign of unity during the national anthem prior to their game against the Cincinnati Bengals at Lambeau Field on September 24, 2017 in Green Bay, Wisconsin. Dylan Buell/Getty Images/AFP
Share
Print
Philip Kosloski - published on 09/28/17

Players of the NFL team challenge fans to lock arms in hopes of creating a conversation, not further division.

This past weekend the NFL re-ignited a major controversy regarding the singing of the National Anthem. Many players and teams chose, in response to President Trump’s recent criticism of NFL players who demonstrated against racial injustice during the anthem, to kneel, sit or stay in the locker room during the flag ceremony prior to kickoff. It caused mixed reactions across the nation and many fans were unhappy about what they saw as a political stunt.

In response to the controversy the Green Bay Packers issued a statement that Thursday would mark an opportunity to promote unity, instead of division. The statement, signed by the players of the NFL team, encourages everyone to stand during the National Anthem and lock arms, as a sign that all are dedicated to the same core values of America.

This Thursday during the national anthem at Lambeau Field, Packers players, coaches and staff will join together with arms intertwined—connected like the threads on your favorite jersey. When we take this action, what you will see will be so much more than just a bunch of football players locking arms. The image you will see on September 28th will be one of unity. It will represent a coming together of players who want the same things that all of us do—freedom, equality, tolerance, understanding, and justice for those who have been unjustly treated, discriminated against or otherwise treated unfairly. You will see the sons of police officers, kids who grew up in military families, people who have themselves experienced injustice and discrimination firsthand, and an array of others all linking together in a display of unity.

The players further explain that, “We believe that in diversity there can be UNI-versity. Intertwined, we represent the many people who helped build this country, and we are joining together to show that we are ready to continue to build. Let’s work together to build a society that is more fair and just.”

Quarterback Aaron Rodgers said to reporters about the situation, “Outside the building, I think the message has been diluted a little bit and it’s been kind of taken away from what we were trying to do: Show a united front (by) guys linking up together.”

Green Bay Packers Coach Mike McCarthy gave his support to the initiative and said, “I think it’s a time to listen … I think everybody can do a better job of listening and make sure the messages that are trying to be delivered are heard and vice versa. I think that’s the biggest thing in life … I think we all can sit back and listen a little more right now.”

The Thursday night game against the Chicago Bears will be aired nationally on CBS at 8:25 p.m. EDT.