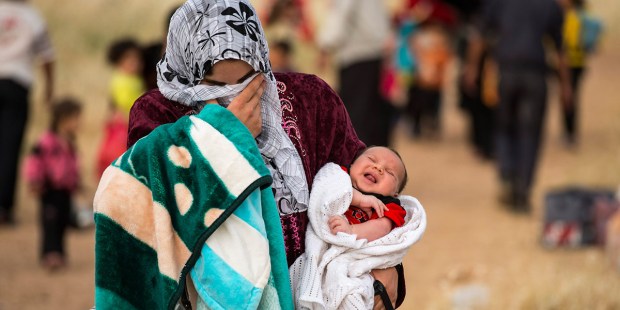 The Trump administration is proposing that the U.S. Government admit up to 45,000 refugees from around the world in fiscal year 2018, less than half of what the Obama Administration had proposed.

“The security and safety of the American people is our chief concern,” said a State Department official during a briefing with reporters on Wednesday. “While maintaining the United States leadership role in humanitarian protection, an integral part of this mission is to ensure that refugee resettlement opportunities only go to those who are eligible for such protection and who are not known to present a risk to the safety and security of our country.”

The official said that the Department of Homeland Security and other agencies have “started strengthening the vetting process used in the U.S. Refugee Admissions Program.”

Refugee resettlement agencies say the new cap falls far short of what is necessary to meet growing humanitarian needs around the world. They had recommended a limit of at least 75,000.

The Obama administration had set a goal of 110,000 refugees that the U.S. would accept in fiscal year 2017, but President Donald J. Trump, in his executive order on immigration, ordered a four-month shutdown of the refugee resettlement program to investigate its security. He capped the total number of refugees at 50,000 for FY 2017.

During Wednesday’s briefing, the State Department official insisted that even with this new ceiling, the United States will “continue to permanently resettle more refugees than any other country.” The program will admit up to 19,000 refugees from Africa;  17,000 from Near East South Asia; 5,000 from East Asia; 2,000 from Europe and Central Asia, and 1,500 from Latin America and the Caribbean.

Coincidentally, the same day as the briefing, Caritas International initiated a campaign called “Share the Journey,” inviting Catholics to “encounter” migrants and refugees by hearing their stories.

The number of forcibly displaced persons is at its highest level recorded, at more than 65 million worldwide. In 2016, there were more than 22 million refugees leaving one country for another.

The Trump Administration has also been focusing more on efforts to improve conditions in some of those countries so that people do not need to flee.

“For the cost of resettling one refugee in the U.S., we can assist more than 10 in their home region,” Trump said in a speech to the United Nations earlier this month.