Who was “Good King Wenceslaus”? 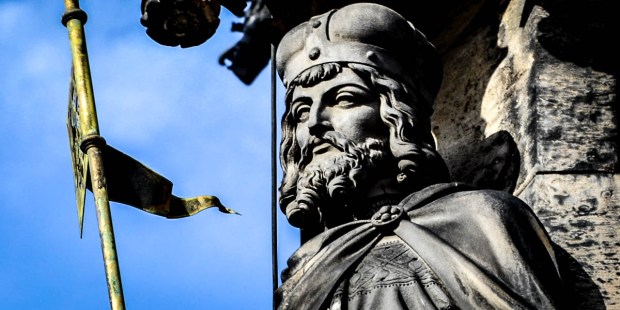 The true story behind the popular Christmas carol.

You know the classic Christmas carol “Good King Wenceslaus”? Well, here’s the true story behind that popular tune, which honors a saint whose feast day is September 28.

Technically, Wenceslaus was never a king during his lifetime; his official title was “Duke of Bohemia.” He was a just ruler, who did all that he could to take care of his people. A common legend relates how Wenceslaus would go out every night to give alms to the poor. Cosmas of Prague, in 1119, writes:

But his deeds I think you know better than I could tell you; for, as is read in his Passion, no one doubts that, rising every night from his noble bed, with bare feet and only one chamberlain, he went around to God’s churches and gave alms generously to widows, orphans, those in prison and afflicted by every difficulty, so much so that he was considered, not a prince, but the father of all the wretched.

This is where the popular carol “Good King Wenceslaus” gets its origin. The carol recounts how Wenceslaus looked out at night and saw a poor man, shivering from the cold. He orders his page to bring the poor man in, gather food and start a fire. The song ends by encouraging others to do the same.

Therefore, Christian men, be sure, wealth or rank possessing,
Ye who now will bless the poor, shall yourselves find blessing.

Wenceslaus was brought up by his grandmother St. Ludmilla, who took him in after his father’s death and raised him in the Catholic faith. Christianity was still very new in Bohemia and it is believed that Wenceslaus’ great-grandfather was converted by Sts. Cyril and Methodius. However, Wenceslaus’ own mother Dragomir was opposed to Christianity and conspired with her son Boleslaw to recapture the throne.

They accomplished what they desired by luring Wenceslaus to celebrate the feast of Sts. Cosmas and Damian (marked today on Sept. 26) in Stará Boleslav. Three of Boleslaw’s companions then murdered Wenceslaus on the way to Mass.

Boleslaw succeeded his brother as Duke of Bohemia, but three years later repented of his evil deeds. Soon after Wenceslaus’ death the people of Bohemia venerated him as a saint and martyr, and Boleslaw ordered that his body be moved to the cathedral of St. Vitus in Prague.

The good Duke St. Wenceslaus was posthumously given the title of “King” by the Holy Roman Emperor Otto I.

Wenceslaus’ life is a powerful illustration of Christian charity and true political leadership that remains relevant today. Above all things he led his people by example and showed them how to take care of the poor and most vulnerable of society.

And just for fun, here is Bing Crosby singing the famous Christmas carol: