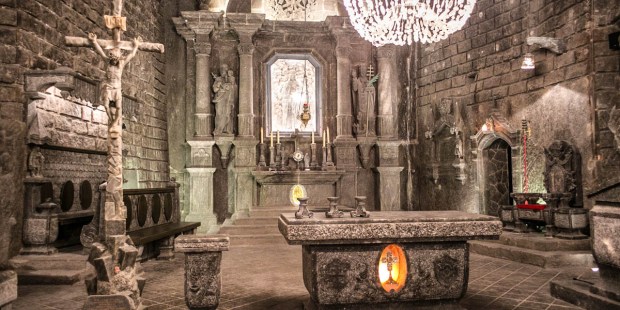 A unique church, which is at the same time a veritable art gallery, can be found over a hundred meters underground.

St. Kinga’s Chapel in the Wieliczka Salt Mine is unique in many respects. This is most likely why it attracts not only tourists who seek a thrill and an “out of this world” experience, but also engaged couples who, fascinated by the church’s magnificent ambiance, want to get married here.

The world’s biggest church built underground is located at the depth of 101 meters in the Wieliczka Salt Mine. Made exclusively of rock salt, it is dedicated to St. Kinga, a patron saint of salt mine workers. One might think it would be dark and murky, but nothing is further from the truth! The splendid chapel, 54 meters in length, 12 meters in height and 18 meters wide, is shot through with the light of elaborate chandeliers made of salt crystals.

All who would like to hide underground and get immersed in prayerful contemplation can do so, because St. Kinga’s Chapel is a place of regular worship; Holy Mass is celebrated every Sunday and, for example, on Christmas Eve at midnight. In the 1890s the chapel was located in the still-used part of the mine, yet for over a century now what draws people underground is not the salts, but solely this jewel of a church to be marveled at. This is hardly surprising since its interior is a veritable art gallery, filled with works by talented sculptor-miners. The main artists of this place were Antoni Wyrodek and the brothers Józef and Tomasz Markowski.

Relics of St. Kinga in Wieliczka

It was Tomasz Markowski who sculpted the high altar, the most important part of the chapel. Consisting of three sections, the altarpiece’s side panels feature the figures of St. Joseph and St. Clement (patron saint of miners and of the local parish), with the statue of St. Kinga in the center. The saint’s relics were deposited here in the niche under the altar top in 1994. Tomasz Markowski is also the sculptor of the pulpit, whose lower section represents Wawel Hill in Krakow and the castle built upon it, with defensive walls. In addition, Markowski made the side altars, the reliefs titled Herod’s Decree and The Massacre of the Innocents and a statue of Our Lady of Lourdes.

Another miner-artist, Antoni Wyrodek, decided to work on the chapel’s furnishings. He was responsible for the railing, made of rock salt, which sets apart the chancel of the chapel, as well as the salt floor. The artist’s reliefs focus on scenes from the New Testament such as The Flight to Egypt and The Wedding at Cana. Inspired by a Leonardo fresco, Wyrodek also carved The Last Supper. The chapel also features sculpted scenes reflecting many other passages of Scripture.

Among the chapel’s other features, visitors can see, on the right-hand side, the beauty of the Nativity scene carved by Mieczysław Kluzek, and in the chancel the papal cross, made from four kinds of salt to symbolize Poland’s historic salt mines (Wieliczka, Bochnia, Sieroszowice, and Kłodawa). In addition, a statue of John Paul II was installed in the chapel in 1999. Sculpted by Stanisław Anioł and his assistants, the figure is the world’s only monument of the sainted pope made from salt.

Before the salt mine was finally closed down in 1996, it had already been named a UNESCO World Heritage site (1978) and a listed building under Polish law (1976).

This article originally appeared in Aleteia’s Polish edition. It has been translated and edited for our English-speaking readers.