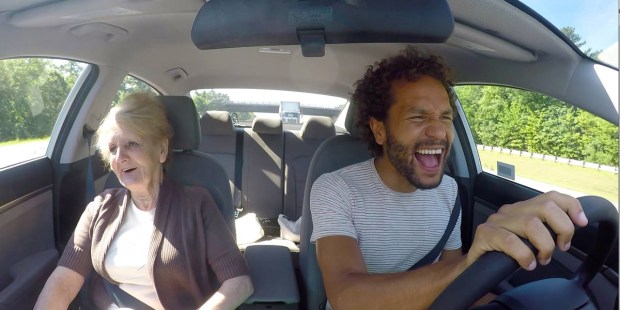 He’s making a documentary to show how these adventures have enriched his mother’s life.

Rebecca Danigelis had worked in hospitality for over 55 years when, suddenly, she was fired. At 76 years old, she had devoted her entire life to this career, and, without it, she said she didn’t want to get up in the morning. So her son, Sian-Pierre, hatched a plan to get his mom excited about living again. He dropped everything to help her complete her bucket list.

Milk a cow in Vermont, take a hip-hop class, go skydiving — these are just a few of the things this mother-son duo has been up to. Her son helped Rebecca join Instagram, and they’ve travelled to England, where she was able to visit her sister’s grave for the first time. “You slowly see over the bucket list items that she is healing, that she is getting better,” Sian-Pierre says. “Living now is almost more important to her than it ever was.”

The two had always wanted to complete her bucket list, but Rebecca never had the time off of work to make it happen. Now, not only is her son helping her make the most of each item, but he is also filming a documentary, called Duty Free, along the way. “To be able to tell the story of someone’s life,” he says, “and do that well is the biggest challenge of my life.”

Sian-Pierre raised the funds to make the film on Kickstarter, receiving $7,000 more than they needed in donations. He says that both he and his mom have already received messages from people who can relate to Rebecca’s story of searching for joy and excitement late in life after losing a long-held career. But Sian-Pierre says that, even if the film goes nowhere, this time spent with his mother “is the best thank-you for my entire life that I could ever give.”

The mother-son team are still ticking items off the list, most recently having walked the route of the Boston Marathon. You can hear more from them below.