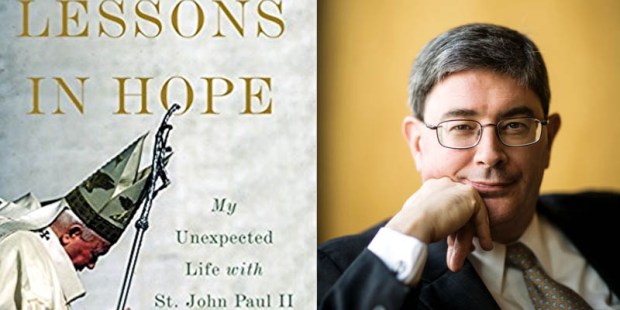 John Paul II’s faith enabled him, at a crucial moment, to propose to the world a correct and liberating anthropology.

George Weigel’s latest book, Lessons in Hope: My Unexpected Life with St. John Paul II, is the third panel in a great triptych he has composed in honor of the most consequential Catholic figure of the second half of the 20th century. While the first two books—Witness to Hope and The End and the Beginning—are marked by careful analysis and thousands of footnotes, this last volume is more personal, filled with anecdotes and stories about the author’s many encounters with John Paul over the years. Taken as a whole, it is a magnificent reflection on the saintly pope’s observation that, in the final analysis, there are no coincidences, but rather only features of the divine providence that we have not yet fully understood. Weigel shows the interweaving of his own life and John Paul’s as an operation of grace that served—as is always the case when grace is in play—to benefit both men.

His distant preparation for the encounter with John Paul commenced with his studies in philosophy as a young man. The introduction to the great Western philosophical tradition enabled him, many years later, to understand the work of a pope whose mind was formed in large part by Thomist metaphysics and the phenomenological method of Edmund Husserl. The apprenticeship continued with Weigel’s immersion in the Sturm und Drang of the post-conciliar scene in both America and Canada. Many intellectuals at the time were convinced that Vatican II represented, at best, a promising first step toward the full modernization of the Church. Their program, accordingly, was radical accommodation to the current scene, not so much a “reading of the signs of the times” as a surrender to them. The inadequacies of the liberal theology of the 1970s caused Weigel to take a deeper look at the thought of Henri de Lubac, Hans Urs von Balthasar, and Joseph Ratzinger, three men who felt that the post-conciliar conversation had gone off the rails and who would play a pivotal role in the papacy of John Paul II.

A final and crucial propaedeutic to telling the story of John Paul was Weigel’s deep immersion in the political and intellectual culture of Poland in the years following the revolution of 1989. Interviewing ecclesiastics, politicos, labor union leaders, artists, and ordinary folks, Weigel heard, over and again, that the key to understanding the transformation of life in Poland was the visit of John Paul to his home country in 1979. Speaking in public of God, of human rights, of sin and redemption, of the Incarnation and eternal life, John Paul, during that historic pilgrimage, awakened in his own people a desire for that most fundamental of freedoms: religious liberty. The cry, “We want God! We want God! We want God!” echoing for 15 minutes in the central square of Warsaw during John Paul’s homily gave expression to the aspirations of oppressed people throughout Eastern Europe and proved to be the beginning of the end of Soviet Communism.

The combination of these experiences was preparing Weigel for the fateful dinner that he would share in 1995 with Richard John Neuhaus, papal secretary Stanislaw Dziwisz, and John Paul II himself. Having read Weigel’s treatment of the Polish revolution of 1989, the pope was convinced that the young(ish) American scholar was the right person to compose the definitive biography. With some gentle prompting and encouragement from Neuhaus, the pope, as it were, popped the question, and Weigel knew that his life would never be the same. One might think that the account of the composition of this enormous study would be a tad dry. On the contrary, Weigel’s anecdotes of interviews with some of the most significant figures in the Vatican are fascinating, and his stories of conversations with many of the pope’s Polish colleagues, especially the members of his original youth group in Kraków, are deeply moving and often quite funny. Though he explored this theme in the previous two books on John Paul, Weigel brings out with particular clarity in this volume how the pope universalized many of his moves and initiatives as priest and bishop in Kraków when he took the chair of Peter, the series of World Youth Days being the most striking example.

In the second half of Lessons in Hope, Weigel several times describes lunches and dinners that he shared with John Paul and his inner circle. Marked by prayer, good food and wine, the speaking of a variety of languages, lots of laughter, a rich exchange of ideas, and vibrant discussion of the latest cultural trends, these meals served, it seems to me, as a symbol of John Paul’s vibrant papacy. Precisely because he was an ardent disciple of Jesus Christ, John Paul was a passionate humanist. His favorite passage from the Vatican II document Gaudium et Spes, cited again and again in his papal writings, is “The truth is that only in the mystery of the Incarnate Word does the mystery of man take on light.” It was the pope’s Christian faith that enabled him, at a crucial moment in modern history, to propose to the world a correct and liberating anthropology. Through the grace of God, George Weigel was uniquely positioned to tell that story.