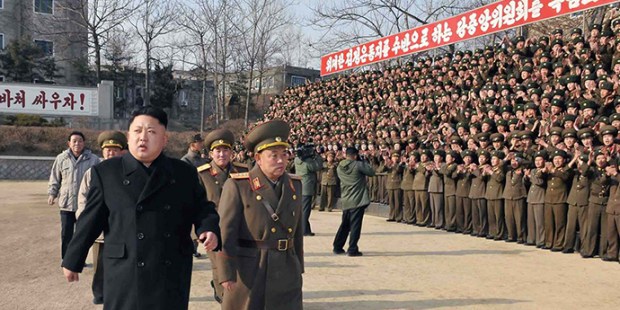 Most important thing right now, says Rex Tillerson, is to lower the heat between Washington and Pyongyang

Between testing missiles and throwing out highly threatening statements, North Korea and the United States seemed like they were on an almost inevitable collision course.

Now, it’s been reported, there is actually some kind of dialogue taking place and that cooler heads may prevail.

Secretary of State Rex W. Tillerson said Saturday that the Trump administration is in direct communication with the government of North Korea over its missile and nuclear tests.

“We are probing, so stay tuned,” Tillerson said, when asked about how he might begin a conversation with North Korean dictator Kim Jong-un. “We ask, ‘Would you like to talk?’ We have lines of communications to Pyongyang — we’re not in a dark situation, a blackout. We have a couple, three channels open to Pyongyang.”

The question is, though, will Pyongyang cooperate? State Department spokeswoman Heather Nauert said in a statement, “Despite assurances that the United States is not interested in promoting the collapse of the current regime, pursuing regime change, accelerating reunification of the peninsula or mobilizing forces north of the DMZ, North Korean officials have shown no indication that they are interested in or ready for talks regarding denuclearization.”

The secretary of state made the comments at the residence of the United States ambassador to Beijing after a meeting with China’s leader Xi Jinping. He clarified that U.S. talks with North Korea are direct, not using China as an intermediary. He also said the most important thing was to lower the temperature of the threats that have been exchanged in recent days between Kim and President Donald J. Trump.

“The whole situation is a bit overheated right now,” he said. “If North Korea would stop firing its missiles, that would calm things down a lot.”