Holy Family, Sts Peter and Paul, Patrons of Las Vegas, pray for us 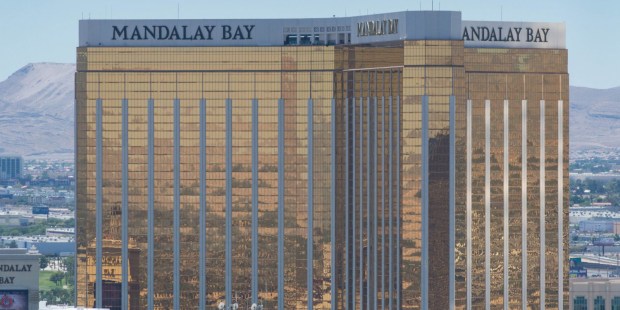 The story is still unfolding, and particularly where social media is concerned, too often the first details turn out to be untrue. In this case, what is definitely known — the horrifying videos are all over Twitter — is that during an outdoor “Harvest Festival” music concert at the Mandalay Bay Hotel in Las Vegas, some person or persons began shooting round after round from an automatic weapon, into the standing crowd that included families with children. Initial reports suggest multiple casualties, and a conflicting number of fatalities. There are reports of a suspect found dead, on the 32nd floor of the hotel, which was apparently the source of the gunfire.

UPDATE: Death toll rises to 50; Deadliest Shooting in US History

The story is still developing, but we can pray, and keep praying, that first responders are able to do their work effectively and unimpeded, that the terror ends quickly, that those injured may recover, and that families may be consoled.

According to the website for the Diocese of Las Vegas, the city’s patrons are the Holy Family, and Saints Peter and Paul. This is also the feastday of the Holy Guardian Angels, to whom we turn for protection.

I know this brings the question: where were the guardian angels of those hit by the mad, evil spray of bullets? I don’t know the answer to that, and no one does, but if initial reports are correct, someone tried to kill hundreds, and did not succeed.

O Lord, by whose design the sands of our lives run fast or slow,
be with us in this time of terror;
send your Holy Spirit to help us grow in wisdom
in the face of such a senseless act.
Holy Family — Jesus, Mary and Joseph — be the consolation of families impacted
by this violence and mayhem.
Saints Peter and Paul, patrons of the city,
Saint Michael the Archangel, patron of First Responders, pray for Las Vegas.
Kyrie Eleison
Christe Eleison
Kyrie Eleison
For the sake of Christ’s sorrowful passion, have mercy on us, and on the whole world.
Amen.