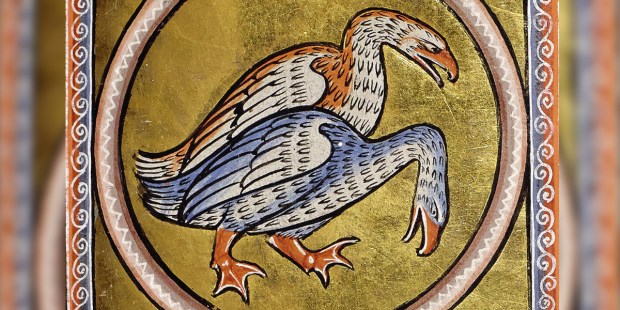 What is sometimes seen as a silly little bird is venerated as a heavenly sign in Christian art.

In the Roman tradition, geese were seen as a symbol of providence and vigilance. There exists a legend that when the Gauls had invaded the Eternal City, they reached the Capitoline Hill and tried to seize it at night. As they approached a temple dedicated to Juno, a sacred flock of geese were awakened and alerted the Roman guards. The Roman army turned back the invaders and the geese went down in history as saving Rome.

St. Isidore of Seville recounts the virtues of geese in his writings. “The goose took its name [anser, in Latin] from its similarity to the duck [anas, in Latin], or because it swims frequently. Geese watch at night and give warning with their noise; they can smell humans better than any other animal can. Geese warned Rome of attack by the Gauls.”

Interestingly, the ancient Celtic people saw the Holy Spirit not as a hovering white dove but as a “wild goose.” The meaning behind this peculiar choice is because they saw how the Holy Spirit has a tendency to disrupt and surprise. The Holy Spirit moves in our lives in an unexpected fashion, similar to the actions of a wild goose.

This reality is constantly reflected in the lives of the saints, who often had their own ideas regarding how they would follow God, but were then led in an unexpected way. St. Francis of Assisi is a perfect example, a man who heard the voice of God to “rebuild my church,” and set out initially to rebuild the physical church of San Damiano. Francis thought he was following God’s call when he gathered bricks to repair the church that was falling apart. However, the Holy Spirit surprised him by redirecting his efforts to the Church at large, building up a spiritual foundation for a religious order that would change the world.

So the next time you set out on a “wild goose chase,” it might not be you who are chasing the goose, but the “goose” who is chasing you!

Read more:
5 Birds and their symbolism in Christian art