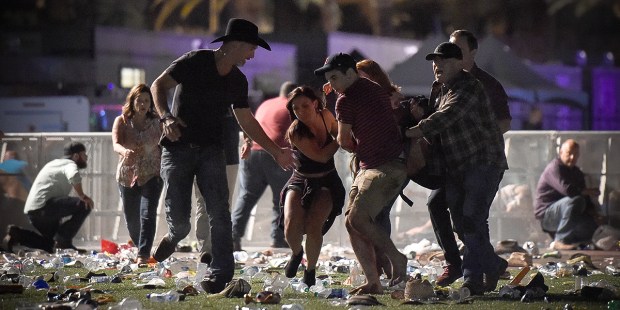 Police rule out terrorism as motive

UPDATE: The death toll has now been reported at 58 people, with about 515 people injured.

In what is turning out to be the deadliest mass shooting in U.S. history, more than 50 people were killed at a country music festival on the Las Vegas Strip Sunday night, mowed down by apparently one gunman.

The Las Vegas police said Monday that 406 people had been taken to hospital.

The shooting occurred opposite the Mandalay Bay hotel and resort on the Strip.

There have been conflicting reports about how the suspect, Stephen Paddock, died. The Los Angeles Times reported Las Vegas police saying the 64-year-old resident of Mesquite, Nev., was killed after a SWAT team burst into the 32nd floor hotel room from which he was firing at the crowd. CNN reported Sheriff Joseph Lombardo saying, “We believe the individual killed himself.” National Public Radio reported police saying that when police entered the room, they “found the suspect dead.”

Lombardo said “in excess of 10 rifles” were found in the room. He later said that information suggests Paddock had been in the hotel room since Sept. 28.

The gunman appeared to have begun firing at 10:08 p.m. from the 32nd floor of the Mandalay Bay hotel toward the concert venue across the street, authorities said. Jason Aldean was playing the final part of the Route 91 Harvest festival.

SWAT teams responded to the scene immediately, and police reported clearing out the Mandalay Bay’s 29th floor and working their way up to the 32nd floor, the New York Times reported.

Lombardo said that authorities have no evidence of a motive. “We don’t know what his belief system was at this time,” he said. He called Paddock a “lone wolf.”

Police have located a woman, identified as Marilou Danley, who was believed to be traveling with Paddock and is listed as living at his address in Mesquite, about 80 miles northeast of Las Vegas.

Authorities executed a search warrant at the suspect’s home and found several rifles and ammunition.

The shooting went on for about more than 30 seconds before the music stopped, and another burst was heard later.

The scene erupted into chaos as thousands of people began to panic, said the New York Times. “Everyone was running,” said concertgoer Gail Davis. “You could see people getting shot.”

Jake Owen, a country singer who was on stage with Aldean when the shooting began, told CNN on Monday that it was like “shooting fish in a barrel from where he was.” There were about 22,000 people attending the concert.

“This is not an exaggeration: This shooting was going on for at least 10 minutes,” he said. “It was nonstop.”

Matt and Robyn Webb from Orange County said they sheltered underneath their seats as burst after burst of gunfire rained down from the direction of Mandalay Bay.

Bernice Allard, who came to the concert with her husband, Frank Allard, told the Las Angeles Times that there was screaming when the shooting began. “Single shot. Single shot, then a lot of shots,” Frank Allard said.

Allard, 56, said the crowd began to stampede, and he grabbed a nearby fence, stretched both arms wide and tried to shield his wife from the danger. Then they ran.

A University Medical Center spokeswoman said the hospital was treating “many patients” with gunshot wounds. There were so many that people were arriving at the emergency room with gunshot victims loaded into their cars, local media reported.

Two of the dead may include a pair of off-duty police officers who were attending the concert.

The Islamic State group claimed responsibility for the mass shooting in Las Vegas, saying that the perpetrator was “a soldier” who had converted to Islam months ago, AP reported. ISIS provided no evidence to support the claim. But FBI Las Vegas Special Agent in Charge Aaron Rouse said that the agency has “determined, to this point, no connection with an international terrorist group.”

The Rome Catholic Bishop of Las Vegas, Joseph Pepe, issued a statement Monday, saying, “We are praying for those who have been injured, those who have lost the lives, for the medical personnel and first responders who, with bravery and self-sacrifice have helped so many.”

“We are also very heartened by the stories of all who helped each other in this time of crisis,” Bishop Pepe said. “As the Gospel for today’s Mass reminds us, we are called to be modern day Good Samaritans. We continue to pray for all in Las Vegas and around the world whose lives are shattered by the events of daily violence.”