Pope: Without closeness, the “other” remains a stranger, or even an enemy 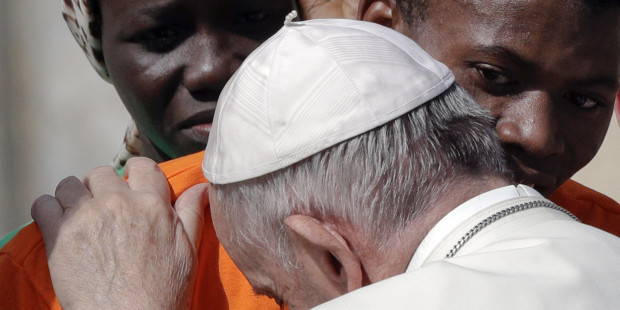 But with the closeness that comes from mercy, we can discover the “secret that each person carries inside.”

This was the claim made by Pope Francis on Sunday during a visit to Bologna, a city with historical significance in recognizing the dignity of the person.

The integration of migrants “begins with knowledge,” said Pope Francis during his Sunday visit to a regional hub of migrants who have arrived on the coasts of Italy.

After a stop in Cesena, Italy, Pope Francis went to Bologna for a pastoral visit in the context of the diocesan Eucharistic Congress there.

“Many people don’t know you, and are afraid,” said Francis, after spending an hour greeting the migrants one by one. “This makes them feel like they have the right to judge,” thinking that “they see things correctly.”

But one cannot “see things correctly,” except through the “closeness that comes from mercy. Without it, the ‘other’ remains a stranger, or even an enemy,” he pointed out.

Integration begins, therefore, with “knowledge,” the pope underlined. Contact with others leads to “discovering the secret that each person carries inside, and the gift that each person represents.” This makes insertion into the new community possible.

The pope has often spoken about the need to welcome migrants with generosity and openness. At the same time, he has emphasized that countries must be able to integrate the migrant communities so that they are not ghettoized.

The Holy Father has also given his support for a Caritas campaign just launched, called Share the Journey, which aims to facilitate encounters between migrants and members of host communities.

Pope Francis asked that more countries adopt programs for welcoming migrants, and open humanitarian corridors for them. “Such measures would make it possible to avoid insupportable waiting periods,” he explained.

Bologna was the first European city to free its slaves, the Successor of Peter noted, referring to the Liber Paradisus (the “Heaven Book”)—a legislative text adopted by the city in 1256.

There were 5,855 slaves at that time, the pope said. “The name of each one of them was written in a book,” he said. “How I wish that your names were also written down” somewhere, the pope said, “so we could find together—as happened back then—a common future.”

In the middle of his speech, the pope requested a moment of silence and prayer for those who have died trying to reach Europe.

The Holy Father made the same point about getting to know migrants in a speech to mayors of major Italian cities at the end of September. He offered an image, saying there is a need to widen town squares, instead of building higher towers, so as to facilitate opportunities and create spaces for people to meet one another and find fulfillment in relationships.

Here is an excerpt from the pope’s press conference on the return flight from Colombia, September 10, when he spoke of immigration and integration:

Second, I feel much obliged to Italy and Greece, because they have opened their hearts to migrants. Yet opening our hearts is not enough. We do need to open our hearts, first and always; this is also one of God’s commandments, to welcome others; “You too were a slave, a migrant in Egypt” (cf. Lev 19:33-34), as the Bible tells us. All the same, governments have to manage this with the virtue proper to governance, which is prudence. Meaning what? First, how many places do we have available? Second, not just to accept, but to integrate. Here in Italy, I have seen marvelous examples of integration. When I went to the Roma III University, four students asked me questions. While the last one was asking her question, I kept looking at her and thinking: “I know that face …” Less than a year ago, she had traveled with me on the plane from Lesvos. She learned Italian and because she was studying biology in her country, she did her equivalency and continued her studies. She learned the language. This is what it means to integrate. On another flight – returning from Sweden, I think – I spoke of Sweden’s integration policy as a model, but Sweden too has prudently said: “This is the number; more than this we cannot handle,” because of the danger of non-integration. Third, there is the humanitarian issue that you mentioned. Is the world aware of these camps, of the conditions there, in the desert? I have seen photographs … Exploiters exist. You spoke of the Italian government. I think they are doing everything possible to provide humanitarian assistance, and to solve a problem that they cannot take on … But [to sum up]: always an open heart, prudence, integration and humanitarian assistance.