Pope: Are you a Christian? Then don’t be a complainer! 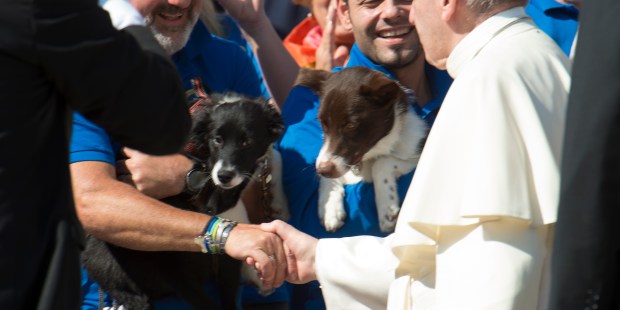 Our faith in the Resurrection tells us every bad thing comes to an end!

“A Christian does not permit himself to be carried away by discouragement or complaints,” Pope Francis said today during his Wednesday general audience, attended by some 15,000 people.

In fact, Francis said, a Christian is not a complainer, and he doesn’t live sunk in anger or sadness, because thanks to the Resurrection, he’s certain that all bad things come to an end — that no night is eternal.

Furthermore, a Christian recognizes that “there’s no one [so lost that he] cannot change and no hatred that cannot be overcome with love.”

This hope sometimes comes at a price, the Holy Father admitted, referencing the Christians of the Middle East who give their lives for this witness. They are “true Christians,” he said, who “have Heaven in their hearts.”

Read more:
‘No complaining’: That sign on the pope’s door is as powerful as an encyclical

With these reflections, the Bishop of Rome continued his series of Wednesday audiences on the theme of hope. Today’s focus was on “missionaries of hope today,” since he said, “October is a month that the Church dedicates especially to missions.”

On this feast of St. Francis of Assisi, the pope who took his name said that “the nucleus of the Christian faith is the resurrection of Jesus; because of this, a Christian cannot be a prophet of doom.”

Our testimony should be not just with words, but with our lives, he continued, inviting the faithful to be men and women of hope, witnesses in their “way of welcoming, of smiling, and above all, of loving.”

The force of the Resurrection makes “Christians who are capable of loving where it seems there is no reason to love, and of opening spaces of salvation where it seems that everything is lost, humanly speaking.”

One who has Christ at his side is not afraid — and not because life is easy and comfortable, because that is not the case for true Christians, he said.

Christians fall, but they get back up again, not of their own merit, but out of love for Jesus, the pope said. “The seed has fallen to the ground, but it has given much fruit.”

In all of this, Francis assured, Christians are missionaries of hope.

He concluded with an invitation to prayer: “Let us ask Jesus, through the intercession of the Virgin Mary and of St. Francis of Assisi, that we might know how to always spread seeds of hope and love around us.”

Read more:
Is it possible that you’re refusing the joy God is offering you?