Saint Therese: Herald of the Apocalypse? 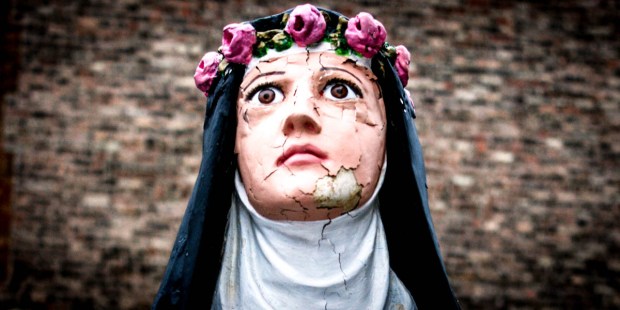 Who could describe as “sweet” the reading of a book that gives an account of the rise of the Anti-Christ, the tribulations that will mark the end times, followed by meditations on death, judgment, Heaven and Hell? “Reading this book was one of the greatest graces of my life …The impression I received from it is too sweet to express. All the great truths of religion and the mysteries of eternity plunged into my soul a happiness not of this earth.”

So wrote Saint Thérèse in her autobiography about End of the Present World and the Mysteries of the Future Life, a book she cherished for preparing her for the trials of monastic life as well as the happiness of Heaven.

Here we might be inclined to dismiss Saint Thérèse. We might say: “Sure—Saint Thérèse would enjoy a book like that! She’s a great saint in Heaven who had a high tolerance for pain and suffering in this life!  She was confident in the glory that awaited someone with her sanctity—but what about the rest of us?”

Such statements, I believe, misread Therese, misread the book, and misunderstand the sovereignty of God. Thérèse had no illusions about either the trials or the brevity of life; she was no stranger to physical and interior suffering; her discipleship shielded her from no cross. What made the book “sweet” for her was its account of Christ’s inevitable triumph—the victory won at Calvary, a victory confirmed by the Resurrection, a victory we are offered a share in by grace.

More than that: Saint Thérèse was sure, in a way that I think most of aren’t, that Christ the King—crucified, risen and returning—is our King who is reigning right now.

Read more:
Therese of Lisieux: Is the Little Flower the most dangerous of saints?

Christ the King is not an absentee landlord who abandoned his property at his Ascension, promising to return to fix things up after squatters burn down creation. No! Christ the King is sovereign and reigning right now, and those who submit to his authority, who take his yoke of discipleship, can be sure that they will find rest for their souls in this life, and will share in his glory in the next.

Saint Thérèse faced the future without timidity, because she knew, through prayer and charity, the Lord who holds us in his hands.

What did Saint Thérèse find in this book that allowed her to find sweetness even in darkness, and what can it offer to us? First, the author, Father Arminjon, gives us a description of the times leading up the final conflict, a description that might strike us as being uncomfortably familiar:

“The end of the world, Christ says, will come when the human race, sunk in the depths of indifference, is far from thinking about punishment and justice. It will be as in the days of Noah, when men lived without a care, built luxurious homes, and mocked Noah as he built his ark … Civilization will be at its zenith, markets overflowing with money, and stocks will never have been higher. Mankind, wallowing in unprecedented material prosperity, will have ceased to hope for heaven.”

Just as Thérèse is not a sour saint, Father Arminjon is not a doomsayer. This book can bring hope and sweetness, as it did for Thérèse, if we take to heart its summation of Christian wisdom:

“Our destiny is an enigma, which reason alone cannot explain; but faith elevates our thoughts, strengthens our courage, and inflames our hope. It tells us: have no fear; you are not wandering along some lost and uncertain path. Beyond our mortal years, there is a new life, of which the present one is only a representation and an image. On this earth, we are travelers; but, beyond the stars and all space, our heritage and native land is found up above. Pilgrims and exiles, we now live under tents; in the world to come, the Lord will build us permanent dwelling-places.”

Doesn’t there seem a gap between the darkness of the world and the brightness of the Heavens we are called to?  How shall that gap be bridged?  The answer to that question is the key to understanding the book and the key to understanding the Little Flower’s delight in it. Father Arminjon answers:  “Heaven and earth were separated; the Cross has brought them together.”

In other words, the only bridge that connects us between the trials of any time and place, and the glory for which we were made, is the Cross of Christ. Accepting his yoke, walking in his company, being fed by him at the altar of sacrifice, these are the steps necessary to removing  anxiety as we face the future, and the Kingdom that is coming.

When I write next, I will offer a reflection on reverence and piety. Until then, let’s keep each other in prayer.