The Bible’s not enough 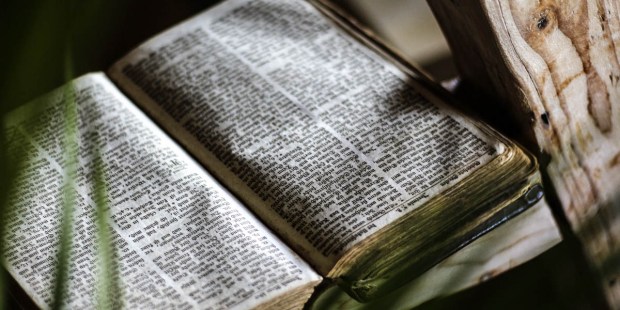 It may or may not be true that our Evangelical friends “really know their Bible,” because they know it outside of the Church.

It’s a theological trainwreck, is the Protestant dogma of sola scriptura, and yet lots of Catholics half-believe it. It’s the American religion’s formative idea and we pick it up the way we pick up the rest of our culture’s assumptions.

I write an apologetics column for the Pittsburgh Catholic, so people ask me questions. Some surprise me. Older Catholics, men and women who could be chapters in a book on models of Catholic devotion, tell me, anxiously, that a friend says a Catholic belief isn’t in the Bible. That really bothers them. They always — and I mean always — want a biblical answer in the Evangelical form. They want a Scripture text with the words “immaculate conception” or “assumption” in it.

They will also say of Evangelical Protestant friends, “They really know their Bible,” and say it as if this were the greatest goal of the Christian life. (I don’t even think that’s true, actually, and Evangelical pastors themselves lament how little Scripture their people know.)

A friend teaches a class for Catholic students at a small very Presbyterian college nearby. The kids take their faith seriously, seriously enough to give up an evening to studying it and talking about it. Yet they often ask him, “Where is that in the Bible?”

Judging from what he said and from my own experience, they expect the Bible to teach the Catholic doctrine overtly. If it doesn’t, they feel they can’t be sure about it. It’s not “biblical.” Or else they will treat it as a kind of Catholic extra, as a not really crucial addition to “mere Christianity.” Lurking in the back of their minds is some idea of sola scriptura. Their question’s not so much an inquiry as an interrogation.

For those, even Catholics, who feel like this, Catholicism can seem startlingly unconcerned with Scripture. To the question, “Where is that in Scripture?” the Catholic may say, “It isn’t in the Bible, in the way you mean.” Worse, from the Evangelical’s point of view, the Catholic doesn’t seem to care that it’s not in the Bible.

“Catholic Christianity believes that there is a Divine army or league upon earth called the Church,” Chesterton wrote. It believes “that any man who joins it can save his soul by it without ever opening any of the old books of the Church at all. The Bible is only one of the institutions of Catholicism, like its rites or its priesthood; it thinks the Bible only efficient when taken as part of the Church.”

As Dei verbum teaches, “It is not from Sacred Scripture alone that the Church draws her certainty about everything which has been revealed. Therefore, Sacred tradition and Sacred Scripture form one sacred deposit of the word of God, committed to the Church.” They are different sources and they tell us somewhat different things. Each guides and interprets the other.

The council fathers declared at the end of that section: “It is clear, therefore, that sacred tradition, Sacred Scripture and the teaching authority of the Church, in accord with God’s most wise design, are so linked and joined together that one cannot stand without the others, and that all together and each in its own way under the action of the one Holy Spirit contribute effectively to the salvation of souls.” Notice that confident “it is clear.”

Look at one of the Catholic teachings that make people ask “Where’s that in the Bible?” When Pope Pius XII declared the dogma of the Assumption, he didn’t lay out a biblical argument. In Munificentissimus Deus, he says only that the dogma “is in wonderful accord with those divine truths given us in Holy Scripture.”

Pius gives some of the ways in which the dogma is in wonderful accord with Scripture, but he doesn’t offer them as arguments. He’s not declaring the dogma because it’s “biblical.” He’s declaring it because it’s something the Church knows — which means that it’s truly biblical, even if it’s not biblical in a way that sola scriptura accepts.

Do they really know their Bible?

“They really know their Bible,” Catholics say of our Evangelical friends. They say it with admiration. And some do have an admirable knowledge of Scripture. We can do better, and I include myself among those who don’t study Scripture as intensely as we should. If we really believe what Dei verbum says about Sacred Scripture, we will do better.

But here’s the other side. Even if it were true that our Evangelical friends really know their Bible, it’s still only half-true. They know the Bible outside the Church. They know the text, but not always what it means. They read it without the interpretive guide of Sacred Tradition and without the confirming voice of the Church’s teaching authority. They miss such important biblical truths as the Immaculate Conception and the Assumption of Our Lady into Heaven.

The faithful Catholic who never picks up his Bible outside the Mass is still a more biblical Christian than his Evangelical friends who know the text inside out. He would go much deeper into the Faith did he read and study the Scriptures. But his Catholic faith still makes him a biblical Christian.