Batman is probably a Catholic, along with the Hulk, Hellboy, Gambit and Shi 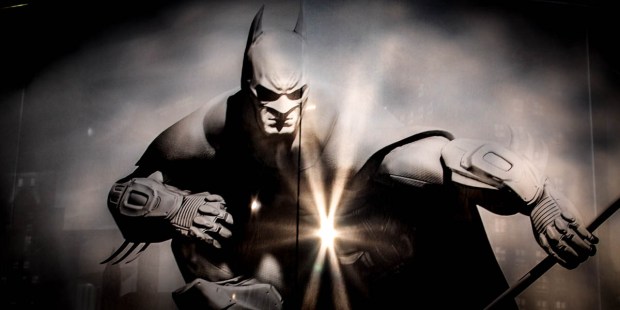 “No Protestant ever suffered guilt the way Bruce Wayne does,” says a DC Comics writer.

“With comics, the fact that we’re dealing with ultimate questions of good versus evil — all of those things that we wrestle with in theology — it makes it a natural place for those to be part of any important story.”  — Greg Garrett, author of Holy Superheroes! Exploring Faith & Spirituality in Comic Books

As fallen humans grappling with injustice and mundane duties from day to day, it is sometimes a relief to immerse ourselves in stories of crime-fighting larger-than-life characters, who demonstrate all-too-human frailty while rising above shattered pasts and deadly enemies. Some of them have superpowers, reminiscent of angelic powers and of preternatural gifts which humans once possessed, such as bodily immortality. Yet, they are usually depicted as very much a part of our broken world, and they too require a divine Savior.

The most well-researched site on the religious affiliations of comic book characters is Adherents.com; another detailed database is hosted at Comic Book Religion. Here are some of the many Catholic comic book heroes and villains listed on the former site:

Charles “Chuck” Dixon, one of DC Comics’ writers for Batman, concluded that he must be Catholic, saying: “No Protestant ever suffered guilt the way Bruce does.”

Indeed, Adherents.com notes the contrast between brooding Batman and perky Protestant Peter Parker/Spider-Man. They both suffered tragic losses in their childhoods, with the murders of Parker’s Uncle Ben and Wayne’s parents. Both are thus motivated to turn vigilante, saving others from similar suffering. But Batman is tormented by survivor guilt, while Spider-Man, the first teenage superhero, manages to maintain a sunny personality. (Spider-Man’s nemesis Venom/Eddie Brock was also raised Catholic, and wanders from church to church begging forgiveness for contemplating suicide.)

Batman struggles with his faith and the reality of the afterlife, but turns to God in pivotal moments, praying by his parents’ cross-marked graves and marrying Catwoman in a Catholic church.

Hellboy, also known as Red, is a demon who was found abandoned in a church as a baby and raised Catholic by Professor Trevor Bruttenholm, director of the Bureau for Paranormal Research. As an adult, Hellboy always carries his rosary and clasps it while entering battle; and in Hellboy II: The Golden Army (2008), the rosary strengthens him to resist the temptation of regaining his princedom and power in Hell, allowing him to thwart the prophecy that he will destroy humanity. Christian actor Doug Jones (who played Hellboy’s friend Abe Sapiens) recounted how his faith was “nurtured and challenged by this story.”

Two other Catholic superheroes who defy their hellish backgrounds are Blue Devil of the Justice League, and Daimon Hellstrom (Hellstorm) of the Defenders.

“For that which causes us trials
shall lead us to triumph.
We must pass through darkness
to reach the light.”
— Hellboy: Blood and Iron (2007)

The swashbuckling masked rider of Los Angeles is a faithful Catholic and true social justice warrior, defending priests and natives in The Mark of Zorro (1920) and retreating to church to yell at God over his friend’s death in The Legend of Zorro (2005) before humbling himself to ask the Almighty for courage and strength to keep fighting on behalf of the people. His best friend and confidant in the latter movie is jolly Franciscan Fray Felipe, who unabashedly joins in the fighting and is partial to drink, saying, “I need one vice to stay in touch with sinners.”

Among other influences, Zorro may have been inspired by Estanislao (baptized with the name of St. Stanislaus), an indigenous magistrate of the Mission San José in California, who led Native American revolts against the Mexican government and the missions, but eventually asked Franciscan Father Narciso Durán to obtain a pardon for his men and himself. Stanislaus County and the Stanislaus River are named after him.

Robert “Bob” Kane, co-creator of Batman, credits Zorro as an inspiration for the Dark Knight of Gotham.

Gambit of the X-Men was raised Cajun Catholic. He steals “the Cross of Redemption” from a Miami mobster’s museum of stolen art, returning it to the Vatican.

Playing cards, charged with kinetic energy as Gambit’s signature weapon, have a Catholic history: “The four suites were analogous to the medieval feudal estates: spades, which had been swords, symbolized the gentry; hearts, which once were grails, the clergy; diamonds spoke for the merchants; and clubs were linked with agriculture and hence the peasantry.” (Iain Gately, “A Heart-Shaped History”)

Another Catholic among the X-Men is Banshee, an Irishman like Robocop.

Young priest Fr. Parrish, assistant to Cardinal Grandenetti, is seduced and killed by a vampire, rising after three days as a vampire himself. He fights his new nature but is discovered and hunted by the congregation. The Cardinal has an unconsecrated wing of the cathedral walled off and Parrish hides there, struggling to hold on to his humanity through prayer.

Years later, Parrish is inspired by another superhero to use his powers in aid of men. He includes a cross in his costume, using the pain to control his vampiric urges. The Confessor, wanting to remain faithful to his priestly duty to teach, recruits Altar Boy as his sidekick. Like some real altar boys, Brian Kinney isn’t too enthusiastic about his costumed identity, but (SPOILER ALERT) when the Confessor sacrifices himself to save the world from invading aliens, Altar Boy takes up the mantle as the new Confessor.

Shi is a Sohei warrior, born to a Japanese Buddhist warrior and an American Catholic missionary in the late 1960s. She is inspired by her 17th-century ancestor Yuri Ishikawa (Tora No Shi, “The Tiger of Death”), who fought against the Emperor’s persecution of Japanese Christians in 1637.

(SPOILER ALERT): Suffering the guilt of accidentally contributing to her father’s death, Shi hunts down her father’s killer. However, the faith imparted by her mother Catherine prevents Ana from wreaking bloody vengeance; instead, she has her father’s murderer imprisoned, and returns to normal life as a gallery manager, although she continues to aid the innocent under the guise of Shi.

The Incredible Hulk was a Marvel Comics wrestler long before there was a Hulk Hogan. The Hulk’s alter-ego, Bruce Banner, is a scientist who injects himself with experimental super soldier serum in an attempt to impress his estranged wife Betty Ross. Before Dr. Banner’s execution for rampaging in New York City, Iron Man places a rosary and a crucifix in his  hand. His funeral is held in a Catholic church, and his parting words (read aloud by Captain America) allude to the afterlife:

My dear friends. I know that serious scientists aren’t supposed to believe in the concept of an afterlife. There’s no proof, after all. No empirical data to suggest there’s anything beyond the here-and-now and yet here I am talking to you all from beyond the grave itself. What does that suggest? What does that tell you?

To me, it’s a perfect illustration that the world is a far more complex place than even the brightest among us would dare to imagine.

After sharing a story about watching a caterpillar emerge as a butterfly from its chrysalis, he concludes:

So don’t weep for me now, my friends, because science insists that I have not died. Energy just always changes state and I refuse to believe that human consciousness is the sole exception to this universal law …

Betty Ross, believing Banner to be well and truly dead, enters the novitiate at a convent; later, when he is revealed to be alive, they are married in a Catholic church.

What can we learn from these superheroes? They fight many menacing enemies, but their greatest battle is usually an interior one, their ultimate victory a triumph of the will, forged by love, over their base instincts.

From the trauma of violence and loss, these shattered souls rebuild their lives, choosing to fight on behalf of innocent people who often remain oblivious and ungrateful for their superhuman sacrifices. They represent the Christian’s lifelong spiritual battle to truly love God, oneself and one’s neighbor, a fight which ends only at the gates of Heaven.